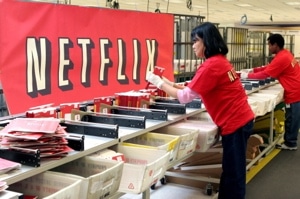 On the verge of becoming a meme today is an anonymous essay from Glassdoor.com entitled ‘Netflix: Culture of Fear’ which outlines a system of control that, in our snarkier moods, we could say sounds startlingly similar to the methods employed by cult leaders, dictators, and the US government. The individual responsible for the post, who claims to have been a manager at the online video streaming and DVD renting company describes a ‘hysterical’ environment of ‘legendary ass covering’ and an overall system of operations marked by its utter meaninglessness.

He writes: A total fear of failure permeates the ranks. Netflix basically gives you a warning on your first mistake, and then fires you after your second mistake. This is why the annual turnover rate is well over 20%. Since there is an entirely new set of employees every few years, nobody knows what process to follow, and everything is chaotic. HR solves this by saying “there is no process for anything! Make it up as you go along!”

The reviewer goes on to explain that while employees are pressured to innovate in a ‘high performance culture,’ everyone is afraid to try something new. Their [Netflix] justification for all the firings is that the fired employees weren’t high performers, he says. But since there is no process, no record-keeping, there is no objective measurement of performance. The end result of such reported schizophrenic fear mongering is that, allegedly, what are called ‘high performers’ become precisely the opposite: employees who ‘get along with the boss and keep a low profile.’ That is, those who have become to frightened not only to say anything, but to do anything about their situation, let alone attempt to innovate.

Another commentator, who also described himself as a former employee of Netflix, states: Did you ever see that movie Logan’s Run? It’s a movie about a dystopian society in which everyone is eliminated once they reach the age of 21. Netflix is like that. They just keep you around for a few years to run the machinery. Since the company is run for the benefit of a few lazy execs they have no career path for the working man. Their plan from the beginning is to eliminate you. Sad.

Before December 21st all comments to the piece had been in agreement – or at least tacit admiration for the author’s particular brand of absurdist prose – but today, as the piece got more Delicious bookmarks and retweets, oppositional comments materialized.

Said one commentator, who identified himself as a current Netflix employee:

We have insurance, dude… good insurance, that Netflix pays for. Did you even work here?

And another, who listed his occupation as a Netflix Engineer:

Whoever wrote this either didn’t work at Netflix or is seriously disgruntled. 

But the truth of the situation may not be the point, or at least the more important one. As with any anonymous review, that everything is hearsay is both implicitly understood and, in practice, irrelevant. It matters little whether the writer of the piece has indeed ever been employed by Netflix, and even if the review were found to be a hoax it could still get analyzed, microblogged, and quickly disseminated across any variety of social networks as if he weren’t.

Mainly for that reason isn’t it just as likely that the whole piece is ploy, probably designed by a competitor, to create a fear of joining Netflix, and an early mark of our favorite new (and surely to be abused) buzzword: Cyberwarfare?

Either way, when have the realities of a situation ever mattered when it comes to propaganda, fear and terror?