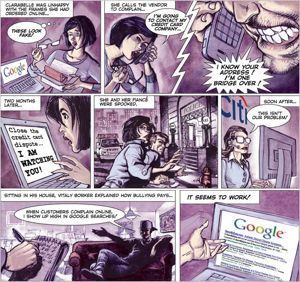 Cyber-bully and online store proprietor Vitaly Borker who admits to routinely sexually harassing customers over the phone with stock lines like “Listen bitch, I know your address…I’m one bridge over” recently recounted how he’d discovered what the tabloids have known, well, probably forever: bad publicity is often the best publicity… especially if you want to rank high on Google’s ‘gold standard’ search algorithms.

The sensation started when Borker, who runs Décor My Eyes, an online eyeglasses retailer for eyeglasses, outlined for the New York Times just how he developed his sadistic strategy of ‘negative advertisement’:

“I stopped caring,” he says, and for that he blames customers. They lied and changed their minds in ways that cost him money, he says, and at some point he started telling them off in the bluntest of terms. To his amazement, this seemed to better his standing in certain Google searches, which brought in more sales.

This because, apparently, negative reviews counts just as much positive ones in some of the internet’s top search engines. Though the original article singled out Google, Danny Sullivan at Search Engine Land pointed out that Bing suffered (if you will) the same problem. Fortunately, Google has since removed Borker’s little shop of horrors from their Product Search (but not before he got internet-famous).

For its part, The Times report continued, saying of Borker, “Before this discovery, he’d hired a search optimization company to burnish his site’s reputation by writing positive things about DecorMyEyes online. Odious behavior, he realized, worked much better, and it didn’t cost him a penny.”

Which creates quite the ethical the problem: why treat customers well when it’s both more economical and more effective to treat everyone like shit? Why create a solid product with quality customer service when you’ll make more money by, allegedly, stalking and intimidating your customers?

Just another case of nice guys finishing last on the internet…