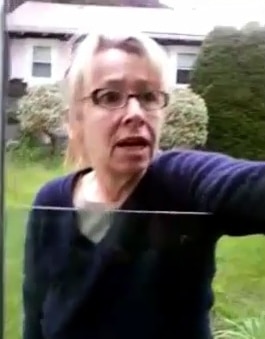 Erika Winchester, secretly caught by a mailman on his cell phone (see video below) as she chastises him, slaps him, and then calls him a “Fucking n*gger thief,” because he refuses to hand over a card for a letter she already signed for has in the space of 24 hours gone from an anonymous ex actress to a part time actress with a real life following. Except the following is not of the devoting kind. Not that the media is ever of the devoting kind…

Judging by the comments left by outraged readers of gawker, 4chan (who were able to quickly unmask our collective hero’s identity once her performance hit the internet in virulent fashion) and reddit Erika Winchester has suddenly become the poster child of everything that is wrong with America. And America is outraged.

Gawker:When the video was splashed all over blogs and message boards like 4chan and Reddit last night, the Internet hive mind quickly tracked the woman down. She was identified as 60-year-old Erika Winchester of Hingham, Mass., and her number and address were posted on numerous sites. (Real estate records confirm Winchester lives at the house featured in the video.) Winchester runs a speech coaching business called The Speech Company, which bills itself as “the nationally leading human-to-human communication organization.” She’s also a sometimes-actress, judging from this old listing on Exploretalent.com.

Of course Gawker being the senseless sensationalists that they unfortunately are decide (since they now too have her number) to give our heroine (who it seems has a history of mental illness) a call:

“Hi it’s Gawker- we just wanted to see if we could capture you being a zany racist one more time for our camera crew. Do you mind?”

Because when you are one of the world’s largest media companies, playing prank calls is a healthier option than asking relevant questions, and of course more entertaining.

We called Winchester’s home early this morning as her phone number was being passed around the Internet, hoping to reach her before her lines clogged. A woman who sounded much like the woman in the video answered with “House of Pizza, how may I help you?” When asked if Erica Winchester lived at the address she angrily declared, “All sorts of people work here, this is a pizza parlor,” and hung up. Clearly she’d already been been inundated with anonymous prank calls.

Which makes us wonder who is more mentally ill ?- The multi national media companies who suddenly want to remind Erika being racist is politically incorrect (which is like telling Hitler after he has killed 6 million Jews and other perceived undesirables he is a racist and a murderer) or Erika who unfortunately can’t let go of some episode in her life or the implicit idea that both the media and this challenged woman are both just as ruthless and shameless as each other, except the media in this case happens to have more clout and a potentially more sinister agenda- to deflect the fact if anyone has a real bias, agenda, or programmed auto truth – it’s not a 60 year old retarded woman who lives on the North East coast who drives a battered Volvo but the seemingly liberal media who practice the same type of hate and torment she does, but on a larger scale.

Who do you hate more now..?