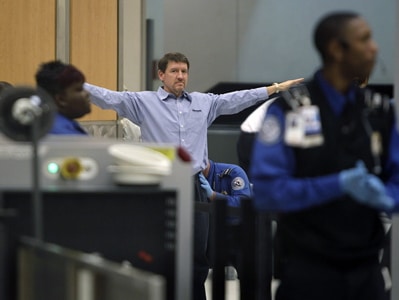 Reports are abound lately of apparently bad behavior (seemingly) at the behest of the TSA which has us groaning that the bitches have gone too far, but perversely thrilled that they are really going out of their way to make sure no crazy nut with a sledge hammer up his bum doesn’t make it on board our sacred flight. That is of course until it comes time to our own very special dehumanizing pat down and delicious affair with TSA handlers who have the savoire faire that of a starving Labrador.

That said, we decided to do a round up of something the latest faux pas and adventures (frankly when don’t we?) in the new department of scandal, human dignity, world security and the good old begrudged American mantra- ” I would never want to get on a plane with a terrorist plan ready to go, but that said, I don’t want you invading that thing called my privacy, and of course my dignity.”

The title alone gives it away, but in short in dreadful anticipation of being made vulnerable and a public spectacle our hero Thomas Sawyer a bladder cancer survivor rot in his own pee once the offending hand went too far and inadvertingly caused the bag that collects his urine (yes life is tough kids) to break- causing him and one supposes the TSA great degrees of humiliation, as the yellow thing oozed and then trickled down our public consciousness this weekend.

Next on our roll call of TSA adventures this weekend was the story of a man who rather than subject himself to a ‘rub down’ (well you know what that means kids) decided it may be a better idea if he just reduce himself to his underwear-(news.com.au) to the point ahem, where there would be very little left to the imagination of the TSA inspectors. How did this go you wonder? Not very well it seems…

Sam Wolanyk was planning to fly to Barbados but declined to go through the full-body scanner, the San Diego Union-Tribune reported.

His refusal meant he was singled out for a pat-down search instead.

Mr Wolanyk allegedly decided to strip down to his underwear instead, his lawyer Jason Davis of Orange Country said.

“It was obvious that my underwear left nothing to the imagination,” Mr Wolanyk said.

“I was not willing to be molested again.