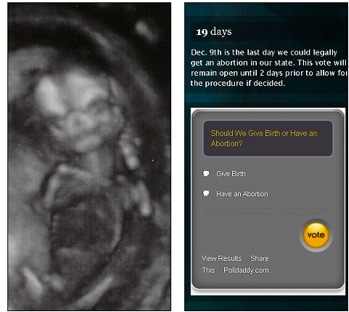 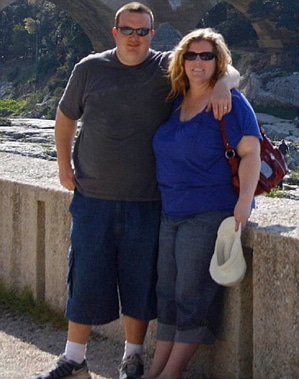 Pete and Alisha Arnold, both 30 and from Minneapolis MN, have launched a new website named birthornot.com – which they plan to use to let the internet decide the fate of their 17-week-old fetus named Wiggles.

Pro-lifers liken the spectacle to mob rule, comparing it to the mob rule of the Roman Colosseum (the most often invoked metaphor for the decline of Western Civilization)… which the Arnold’s seem to believe forms the very heartbeat of the American identity and its traditions.

The couple – who say they ‘vote on everything’ – says they created the poll so “the public could ‘make a difference in the real world,’” which has us personally wondering the depth of their nuanced appreciation of how democracy actually works, assuming that one ever actually existed in America.

Conflating the roles of the bloodthirsty public majority with that of corrupt elected politicians, they said: “It’s kind of like Congress. They might vote for something, but the president has the final veto.” Alisha, who calls herself a Glenn Beck fan, has expressed her willingness to abide by the popular vote, except in reality the illusion of a popular vote is just that.

Reacting to comments made on his site by the internet body, 4chan, Pete Arnold wrote:

I see 4chan as encouraging people to vote in the poll.  How they do it is beyond my control and should not influence decisions about what we are doing here. We support people encouraging others to voice their opinions on an issue as large as keeping a baby or not.  … We don’t see a difference between this and what politicians or supporters do in regards to campaigning.

But while the couple stresses that “The whole point of what we are doing is to allow you as an individual to make a difference,” as one anonymous conscientious objector – whose letter Pete also published – pointed out, “Members of 4chan typically operate as a single, destructive ‘super-entity’” a group people that have chosen to denounce their very individuality to become what one repentant voter called an “internet deity.”

Still, for a couple that says they they’re supporting ‘a woman’s right to choose’ the Arnold’s seem to have overlooked the irony that there’s really no point in fighting for the power to decide something for yourself if you’re just going to let others decide for you, be it by vote, gunpoint, or court order (unless, of course,  the irony was intentional).

And technically, since 4chan, which is stereotypically considered a horde of angst fueled teenage boys, quite earnestly believes that there are ‘no girls on the internet’ (Their ‘rule’ #30) doesn’t that mean that mostly men are choosing for the woman in question? Only a hipster could appreciate that kind of contradiction…which has us wondering whether Wiggles, should s/he end up being born, will someday come to terms with the contradiction of their own being.