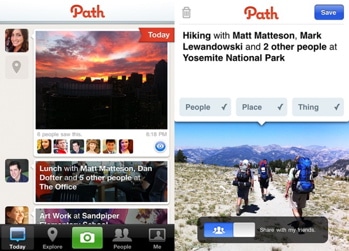 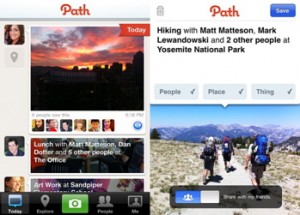 Enacting Robin Dunbar’s theory that one can only maintain a close relationship with about 150 people due to the limiting size of the brain’s neocortex, former Facebook exec Dave Morin and Napster co-founder Shawn Fanning have founded Path: not a social network, but a ‘personal network’ mobile app which promises users browsing from their iPhones a chance to tell their preferred version of their own online life story to their closest 50 frenemies. (The freely produced and semi-public facing memoir we labor over these days now that we’re like, so over writing.)

Morin and Fanning believe that, because online ‘friendship’ has become a word for which we use quotation marks, people increasingly refuse to share the most intimate details of their lives online… which, even if they won’t admit it, must certainly hinder revenues made through those 2.0 profit making standards of data mining and targeted marketing

As Morin told the LA Times: “You usually have about five people whom you trust most, 20 whom you consider your BFFs that you hang out with all the time and about 50 or so who are your personal network,” said Morin, co-founder and chief executive of Path. “Path is built for that.”

And even though, as the report continued, “Morin said he believes people will be won over by the ability to be themselves and share candid, unconstrained moments with loved ones…” a bit like MySpace founder Tom Andersen — who automatically made himself your unremovable friend as your reward for your signing up with him –  aren’t Morin, Fanning, their advertisers, and their data miners promising to the exact same thing to get a glimpse into those parts of your lives you’ve never dared to ‘share’ before only, hopefully, without your ever consciously knowing?

Before you start gleefully snapping iPhotos and mapping your own made up Path, shouldn’t you be asking just who you’re sharing these valuable intimate details with and who is really benefitting?