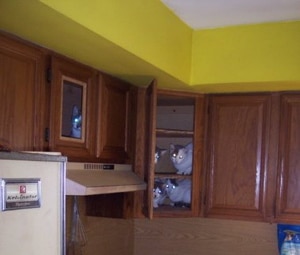 Bill Reilly, a 70 year old community volunteer until recently was living at 115 Armstrong Ave, Staten Island when he decided on the 15th of October to move out, leaving behind two cats he had recently acquired, a male and female cat. It’s what happened after he moved out that has become the bone of contention and a mini cat-astrophe (pun intended…)

Silivie: STATEN ISLAND, N.Y. — The cats were hiding in every room, in the cupboards and under the furniture.

And there was the odor — a stench so awful, neighbors downwind in Great Kills could smell it.

When animal rescue volunteers cleared out 115 Armstrong Ave. at the beginning of the week, they found 38 cats, half of them feral, living amid piles of filth and excrement, with no food or water.

“They’re very, very skinny. And they looked very traumatized. I think they were a week without food. … Some were pregnant. One had kittens already.”

Of course as bad as it sounds it only gets worse once the landlord, Eleftherios (Terry) Theodorakis was finally summonsed, only when someone in the building died and a horrendous stench (not that of the dead person by the way) was noticed …

On Wednesday, Theodorakis was tearing out floorboards and wall panels in an attempt to get rid of the stench. Even so, the smell of excrement remained potent both inside and outside the house. He expects the work will cost him thousands of dollars.

At least two cats could be seen wandering about Wednesday — one hid under a Dumpster, another ran back into the house, spurring Theodorakis to chase it into a bathroom. On Thursday, four cats were still running loose on the property, he said, and rescue workers had set up traps to capture them.

Apart from the stench of the bi-level home and the fact that the entire floor boards will have to be gutted there is some good news for those cats which somehow found themselves in this very unsavory milieu with the arrival of Staten Island Hope Animal Rescue.

Of course this all begs the question, how many pets should dwellers be allowed to keep and why didn’t Mr Reilly just take his cats with him rather than just leaving them be where mischief ensued? Couldn’t this have all been avoided if there had been a little bit of communication between Mr Theodarakis and Mr Reilly?