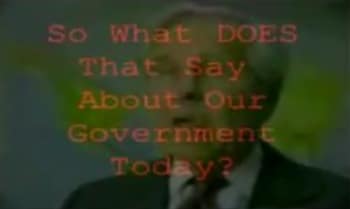 Internet researcher Clif High predicts global thermonuclear war sometime between today and Monday (Nov Eight) according to what’s been trending online as analyzed by his ultra-secret Web Bot program, the code of which he keeps hidden (even from Wikepedia).

Though this constant influx of addictively outlandish doomsday-conspiracy scenarios seems a mundane fact of life these days, for some reason, this time, people seem to be listening totally freaking.

Likening the web and its trending keywords to the stock market and its stocks (the Bot’s failed original intention), High, whose formal training is in linguistics, believes that by analyzing what people are searching now he  can both examine and create a future blueprint of “the collective unconscious of the world as a whole.”

Thereby, High claims, if you pay him $10 for a subscription to his newsletter you too can have 90 days advance notice on all the internet’s search trends (every marketer and tabloid writer’s wettest nightmare). But here’s a free one for all you skeptics: global thermonuclear war (and all its permutations) on Monday, said to be the ‘tipping point.’ (Go ahead and Google it.)

If you’re not yet hyperventilating or praying while retweeting, consider that, as High admits, the trends could just point to a self-creating meme forced by the Web Bot itself — which should illuminate High’s deeper intentions (notice the psychic double entendre) along with the more subtle aspects of his rhetoric.

In one interview, High states that the only possibility other than a war, is that “we could discuss the Hell out of it” effectively diffusing it. Is not his intention precisely to scare you into Tweeting his prediction in hopes that by trafficking his headline highly enough you could save yourself from an early demise?

Which, of course, leads to a far greater question: if half of us don’t get vaporized in the next few days are we going to let some new-age Nostradamus and his self-creating meme machine rule our searches (and our lives by proxy) until we finally manage to tweet ourselves out of our own self-loathing misery?

Is not the real fear to give into here that of talking, at length, about this endless series of fatuous distractions, giving your time to any of these survivalist self-promoters tirelessly hawking increasing urgent calls to purchase this week’s most frightening alien-invasion newsletter?  After all, any proper paranoid would know that “we” always know exactly what “they” want us to know… which, if you think about it, only exacerbates the problem ad infinitum. Moreover, wouldn’t that way of looking at it make Clif the very worst of “them?” ; quite literally ‘the machine‘ we all so love to rage against?