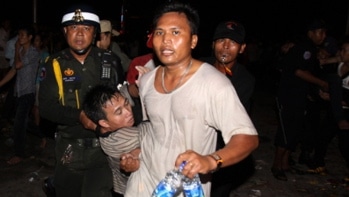 When a celebration for life turns out to be a mourning for death.

Cambodia is steeped in a history of tragedy. Which perhaps should be borne in mind if one considers the context of the horrific events that came to pass Monday evening local time as locals gathered to celebrate the culmination of a three-day water festival, known as the Bon Om Touk, . Inevitably in seeking redemption they have come to mourn death. An ominous cycle embedded in the history of Cambodia.

AOL: PHNOM PENH, Cambodia (Nov. 22) — Thousands of people stampeded during a festival in the Cambodian capital, leaving at least 349 dead and hundreds injured in what the prime minister called the country’s biggest tragedy since the 1970s reign of terror by the Khmer Rouge.

A panic-stricken crowd – celebrating the end of the rainy season on an island in a river – tried to flee over a bridge and many people were crushed underfoot or fell over its sides into the water. Disoriented victims struggled to find an escape hatch through the human mass, pushing their way in every direction. After the stampede, bodies were stacked upon bodies on the bridge as rescuers swarmed the area.

Initial reasons for the stampede included fears of food poisoning, but according to observers the mass exodus can possibly be traced to ten revelers in the enclosed banks who suddenly fell unconscious from the press of the crowds which paradoxically set an exodus of people seeking immediate refuge where as initially the revelry had attracted more revelers to partake in festivities.

Unfortunately, as luck would have it, when the masses started pushing out, they found themselves in a physical mantrap, a long skinny bridge between one end of the embankement to the other which with the sheer force of individuals running into it forced it to recoil. Recoil within itself and suddenly throw volts of electrocution as the wet masses came running through.

Ambulances raced back and forth between the river and the hospitals for several hours after the stampede. Calmette Hospital, the capital’s main medical facility, was filled to capacity with bodies as well as patients, some of whom had to be treated in hallways. Relatives, some crying, searched for the missing Tuesday morning.

“I was taken by shock. I thought I would die on the spot. Those who were strong enough escaped, but women and children died ,” said Chea Srey Lak, a 27-year-old woman who was knocked over by the panicked crowd on the bridge.

And those who were strong and fortunate did survive, and those who weren’t perished in the same vernacular that so many fellow country men perished in the 1970′s when a decree for an extreme political system (the Khmer Rouge and its extreme dogma of Communism) reverted within itself and led to the death of a purported 2 million people.

All of which begs the question what were the locals hoping to find when they came to the event and how bizarre it must seem that what they have come to experience is a banal end result.