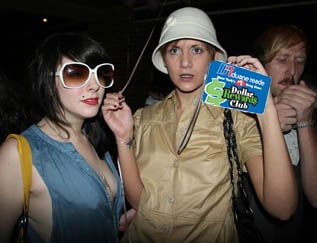 Hipsters are up in arms that Duane Read (recently acquired by Walgreens) is set to open their doors in the heart of hipster land. In fact so up in arms are they that hipsters have united and created a facebook page damning the planned opening. The fear; that Hipster land will suddenly become gentrified…

Gothamist: The Battle for Williamsburg is going down, and the lines have been drawn… on Facebook. As with any great cause these days, a page has been created on the social networking site, titled: I’m Boycotting Duane Reade to Save Williamsburg. Sure, boycotting Duane Reade isn’t going to save Williamsburg, unless you also burn down the Edge and blow up Sea on North 6th Street whilst boycotting it, but it is representative of the turmoil and change happening over there.

Which strikes all as particularly odd. Last time we went for a walk along Bedford Ave (literally just down the street kids…) we noticed that Williamsburg was already gentrified. From $4 caffe lattes, condominiums straddling the epicenter, designer boutiques, hipsters no longer wearing ironic uniforms but this season’s designer outfits (which must count as a reverse irony) and less rock band wanna bes and more Ivy league professionals or at least their look alikes.

The solution? Outfit the new Duane Read with a section for used trucker hats, open call for PBR beer and trimmers for all those dudes out there who insist on sporting facial hair as a last bastion of anti gentrification.

See below links for more adventures on hipsters.

The new Williamsburg is now a quaint suburb in upstate NY.

What are the ten tale signs that you really aren’t a hipster?

Where to hang out in Williamsburg if you are into dating hipsters.