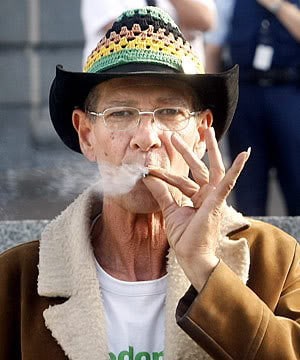 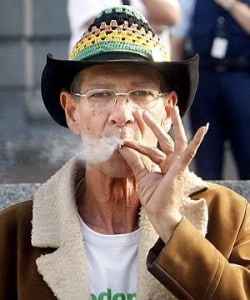 Will a bunch of ‘Kiwi pigs’ getting high tonight?

What’s a clever way to get the authorities to legalize cannabis consumption? Passing legislation, holding education forums, or even getting scientific proof into the mix or how about pushing a shopping cart of the good shit burning up into your local police station? Got your shopping cart ready?

Officers will study CCTV footage showing the shopping cart loaded with smoking weed being pushed into the central police station at the height of a legalization protest, reports 3 News.

Studying the footage or closely testing it for efficacy and potent relevancy? Which begs the question how did the shopping cart end up in the police station in the first place?
The protest, part of the Armistice Tour, a nationwide push for cannabis law reform, began Thursday morning with more than 100 people gathering on Parliament’s front lawn to promote the benefits of marijuana over legal substances like alcohol and tobacco.
The protesters gathered outside the Wellington police station about 6 p.m., when the “smoke bomb” was pushed into the foyer, according to Julian Crawford, an activist and candidate with the Aotearoa Legalise Cannabis Party.

Which makes us wonder, why are the Kiwis so adamant about their ‘good shit?’

“Despite the presence of police and parliamentary security guards this morning at Parliament many of those present were openly smoking cannabis cigarettes,” 3 News reported.

Armistice Tour spokesman Dakta Green said that cannabis was a more natural, healthier option than other drugs and did not fuel crime.

Could this be the ray of lightning that saves the shopping cart from tipping over?

“You cannot overdose on cannabis,” Green said. “There are many people that have died from drinking too much alcohol, one night of heavy drinking and you can die, tobacco will almost certainly kill you… cannabis has never killed anybody.”

“You cannot keep locking us up when the science says cannabis is safer than alcohol or tobacco to the individual and to the community,” Green said.

You can not lock up the community, but you can always sell another keg of alcohol or another cigarette and tax the merry go round. Something it seems you can’t do for the cannabis market.

One day the only thing they’ll be tipping into the police station will be an empty shopping cart. At least let’s hope so…