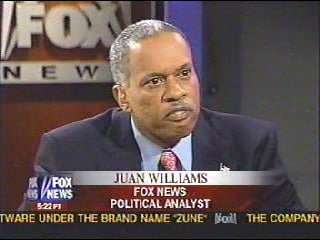 PROGRESSIVE FASCISM is now unquestionably the greatest threat to the First Amendment Freedom of Speech in America.  NPR’s dismissal of Juan Williams for expressing what amounts to a “rational fear” felt by many Americans about an irrational movement hell bent on the destruction of Western Civilization is disturbing. NPR has terminated Juan Williams for his admission on FOX News that since 9/11 he fears getting on planes with self-identified Muslims in Muslim garb.

NPR’s termination of Juan Williams is nothing but more evidence of the emerging Progressive Fascism. Under this growing Fascism, now merely expressing rational fears about an intolerant and irrational ideology and its adherents is sufficient to cost you your job. We keep trying to finesse intellectually the culpability of this troubling ideology, its contempt for individual liberty, freedom and the American democratic system. No matter how liberally elite you are, you need to take a look around what is happening in terms of our defense of Islamicana and our unwillingness to defend Americana. Building Ground Zero Mosque–Yes. Rebuilding Twin Towers–No.  Jews & Christians–No. Islam–yes. If only we questioned Islam as much as many illustrate contempt and ridicule for anything Christian. Ironic that the most Progressive among us embrace the most regressive movement to the spirit of humanity. Now the thought police want to outlaw rational fear.

Funny thing, I tend to get slightly nervous around skinheads wearing Nazi emblems, random citizens of any color late at night strapping with guns or knives and Muslim Clerics burning the American Flag yelling “death to America, all praise be to Allah”, but then again that’s just me. I am a slightly less tolerant American and not earning a salary from America’s mainstream media. Funny, I recall a trip on JET BLUE to South Beach after 9/11 with an  ex girlfriend and being slightly unsettled at the prospect of any angry face on the plane. I never said anything to my then girlfriend but I did view those boarding the plane with a greater degree of circumspection than usual.
Call me crazy but yes, unless it is the Halloween Day Parade in Greenwich Village, I want to know who is hiding behind that MASK (Burka). Firing Juan Williams for essentially admitting how most rational Americans feel makes this a rather SAD day in America. I might even be ok with this if like Benito Mussolini, the leader of the New Left actually made the trains run on time. Don’t wait until it is Midnight before engaging or America will not see dawn.