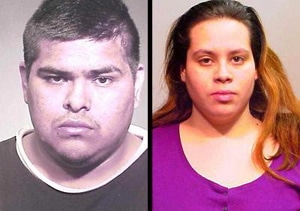 Hell has already laid out the welcoming mats for Manual Aguilar and Anna Navaro.

In the continued blight of violent irrational behavior we bring you this week’s overwhelming winners: Manuel and Anna. How did they win this coveted slot? Let’s take out off our socks and begin the self flagellation…

The weeklyvice: Chicago, Illinois (The Weekly Vice) – Manuel Arellano-Aguilar, 24 and Anna Navaro, 19, were charged Wednesday after they allegedly stuffed a sock into the mouth of Navaro’s 2-year-old daughter, and then proceeded to beat the child to the point of a fractured skull and broken ribs.

According to police, officers were dispatched after Navaro brought her daughter into a hospital to receive treatment for a fractured skull, and multiple rib fractures. Health care workers also found other injuries that appeared to be at different stages of healing.

Isn’t this story sending shivers up your spine? Of course like us you’re probably wondering 2 things. Why did Manuel and Anna resort to this violent behavior and interestingly what excuse were they planning on using when they arrived at the hospital with the little girl? She fell off the swing 43 times in a row?

Navaro reportedly told officers that she and the child had been kidnapped by Arellano-Aguilar. At the same time, Navaro’s uncle flagged down police and told them Arellano-Aguilar stuffed a sock into the child’s mouth, tied her down with a scarves and proceeded to beat her to a pulp.

Now I have to admit that’s one hell of a story. If I was the doctor tending to the little girl’s broken skull and broken ribs I would have asked for the release of the movie rights then and there. But of course the plot later thickened…

After interviewing Arellano-Aguilar, officers arrested Navaro the next night after she confessed to assisting with the abuse. Police say she admitted to binding her daughter’s wrists, legs and mouth with scarves. She then sat back and did nothing as Arellano-Aguilar began pounding on the little girl’s head and body.

The investigation later revealed that the child had been tied up and beaten on at least three separate occasions.

The couple has been charged with aggravated batter to a child. They have both been ordered held on a $2 million dollar bond each.

Can someone please explain to us why people do things like this to each other, especially defenceless children? Hmm, we wonder what color the welcoming mats in hell will be?