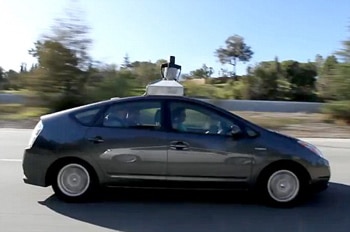 Noticed a hyper-modern looking Toyota Prius (what else) with a Google logo plastered on the side and someone Tweeting instead of driving? Then be extra-careful when you gun the gas (while you still can), because you just may be routinely sharing lanes with an environmentally friendly Google automaton; the first preliminary tests for the up and coming Google car system —  which, ‘so far,’ Google boasts, has been ‘almost accident free.’ No longer content, it seems, with simply guiding all our online movements, Google has taken to imposing their will and restrictions on the physical world as well.

UK Daily Mail: The computer giant boasts that seven cars, which have funnel-like cylinders on the roof that acts as the vehicle’s ‘eye’, have driven 1,000 miles at a time without any hands-on human input.

Transport chiefs were said to be investigating the legalities of the robo-cars, but Google insists its lawyers are confident they are perfectly street legal.

While Google and their detractors have been busy arguing over whether such automation restricts personal freedom at the supposed expense of everyday safety, also lurking within these reports is this rather wasteful statistic: ‘The U.S. Department of Transportation estimates that people spend on average 52 minutes each working day commuting.’

That is, more precisely, ‘more productively’ for Google, by edging us ever closer to the impending fruition of what, at least, should be the ‘creepy’ corporation’s ultimate dream: to set up a physical system which enables us to produce content for its search engine and its ad system without any resting, any downtime, even during that somewhat purgatorial transition periods of commuter transportation.

Why spend precious minutes driving when that time could be better used for data mining?