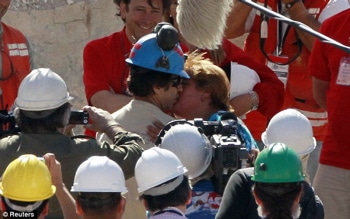 As we can see from his ‘brave’ decision to ask “both his wife and his mistress to greet him on reaching the surface,” recently rescued Chilean miner, Yonni Barrios, the group’s ‘doctor,’ apparently has his way with nurses…

No surprise then that the two women in question “almost came to blows” Barrios’ wife, 58-year-old Marta Salinas, was apparently first notified of her husband’s situation by a younger woman, 50-year-old Susana Valenzuela, the miner’s mistress.

While Barrios is ‘is either very cheeky or very idiotic,’ according to some sources, perhaps there’s a reason why, so they say, our brave adulterer ‘didn’t seem worried at all’ as rumors of his decision also surfaced.

Few could be more critical than the miner’s wife, who discerned most acutely: ‘They think they will all be millionaires overnight but it’s not like that. Only the skillful ones will make something from this.’

Which has us wondering, couldn’t it be that this is all really quite strategic — a decision made not out of love, or from sheer dumbness, but rather strictly as a matter of business?

Far from being simply “crazy and cocky,” (as his wife argues it is) what could be more skillful and meticulous a spectacle than this; and why else would he go about announcing his basest infidelities before all the world’s cameras if he had nothing tangible to gain from the experience?

Perhaps this was the kind of media manipulation they groomed these guys for when they sent down their list of overnight-stardom tips-and-tricks.

The only question left, it seems, is who can make their mistress scream the loudest as, at least allegedly, “Mr. Barrios is thought not to be alone in his complex living arrangements.” Which means, like all other glorified reality stars, we’ll get to see them all compete to be the baddest.

Still, after all they’ve been through, who can blame them for being media whores opportunists?