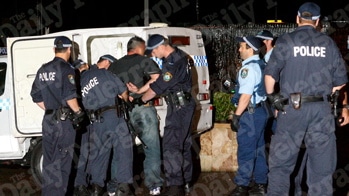 Rumors that ‘flooded’ Twitter this morning as rowdy Australian Rugby fans turned away from St. George’s League Club in Kogarah heard that “something very bad [had] happened’ during victory celebrations for their squad. When throngs of rugby fans ‘rushed’ into Kogarah yesterday to congratulate the Dragons – the newly crowned NRL champions – so overwhelming was the clamoring outside the team’s clubhouse that the City brought in its Riot Squad — with deadly results.

When throngs of rugby fans ‘rushed’ into Kogarah yesterday to congratulate the Dragons – the newly crowned NRL champions – so overwhelming was the clamoring outside the team’s clubhouse that the City brought in its Riot Squad — with deadly results.

Shortly after “Angry fans in the [St. George’s] car park vented their frustrations on security guards,” reports say, “Capsicum spray was used to subdue a 35-year-old man, Steven Bosevski who lost consciousness and was taken to hospital, where he later died.”

Capsicum, the main ingredient in the ‘pepper spray’ commonly used on crowds to, among other things, induce debilitating pain and temporary blindness, is generally considered safe enough to spray into crowds as needed, but has been implicated in a number of deaths over the years, culminating in this most recent one.

Which should at least have some of the more anxious lawyers licking their lips and wondering: if capsicum were classified as a lethal weapon — it apparently is — wouldn’t that amount to nothing less than a grave betrayal of the public trust? Specifically, is it really safe to be wantonly spraying a quite potentially deadly chemical weapons on us en masse?

Though, police say, “the cause of his death is not yet known” and are still conducting inquiries, the incident ought to raise questions not just of whether we should consider the incident an example of police brutality, but also of whether police are using, in some instances, deadlier weapons than we’d ever thought..

Of course, other than that single pesky mortality, the party was a hit, and most reports so far written have ended by speaking about what a good show it was. For example, Perth Now ramped up their conclusion with this little ditty:

“We’ve worked so hard and waited so long for this,” captain Ben Hornby told the adoring faithful. “We gave up our lives for two years … all for this moment.”