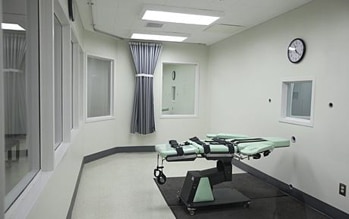 What to do when you run out of the drug necessary for lethal injection…?

Executions in the US have been put on hold recently (well for the exception of Teresa Lewis who was executed over the weekend) due to a sudden shortage of sodium thiopental, an anaesthetic which is used to render condemned prisoners unconscious shortly before their death. Which if you’re like us, just the shear mention of it should you leave dead cold in your feet.

The UK Telegraph: Steve Beshear, the Kentucky governor, has had to postpone signing two death warrants, for killers Ralph Baze and Robert Foley, whose appeals are exhausted.

Oklahoma delayed carrying out a death sentence last month and Arizona is looking for some of the drug ahead of an execution in a month’s time.

In all there are 17 executions scheduled in nine states before the end of January which require the drug.

Which makes us wonder have we had to postpone executions because we have been scurrying at them at such a torrid pace that we have run out of the necessary anaesthea ingredient or is this just nature’s way to force the judicial system to re assess how it goes about applying criminal justice?

The anaesthetic is only produced by one pharmaceutical company, Hospira, which is based in Illinois.

It has blamed the shortage on issues with the supplier of its raw materials, and said new batches of sodium thiopental will not be available until January at the earliest.

Then again if we really must get on with executions perhaps we can resort to some of the tried and tested methods of the past, chiefly electrocution, gassing and even the firing squad. But of course the courts have mandated such practices as inhumane. Which if one pauses long enough to consider it is the double entendre of oxymoron and irony to a prisoner destined to be dead within 5-7 minutes. But then again,maybe those 7 minutes mean more to us than it means to the condemned prisoner…?

A spokesman said: “We are working to get it back onto the market for our customers as soon as possible.”

Aren’t you glad that the judicial system is adamant about making sure it follows through with justice?