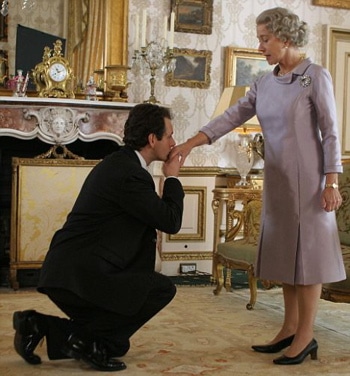 Former English Prime Minister, Tony Blair, has been uncharacteristically silent (oddly enough considering he just penned a book about his life spanning 700 pages) following claims that he plagiarized a piece of his memoir from a film a character based on him.

Screenwriter Peter Morgan first brought forth the plagiarism claims sometime after finding a few familiar sounding syllables hidden who-knows-where in Blair’s bloated 700 pager. According to Morgan, Blair’s book re-uses lines from his screenplay, “The Queen,” particularly a scene in which Tony (who was, in real life, probably shitfaced at the time) meets with Elizabeth, Her Majesty.

New York Post: In Morgan’s script, the monarch, played by Helen Mirren, who won an Oscar for the role, tells Blair, “You are my 10th prime minister, Mr. Blair. My first was Winston Churchill.”

Blair wrote that Queen Elizabeth told him, “You are my 10th prime minister. The first was Winston. That was before you were born.”

Morgan said he was dumbfounded when he read the book.

Although any serious consumer of contemporary culture would certainly be far more ‘dumbfounded’ that someone bothered finishing all seven hundred pages, in any event, Morgan continues…

“I wish I could pretend that I had inside knowledge,” he told the Telegraph. “But I made up those lines.”

It’s easy enough to understand how Tony got confused: how many politicians stars have had trouble separating themselves from the characters they create, even the personas of themselves they play up for the cameras.

While most reports suggest the problem lies in his drinking (somewhere in that long ass book Blair wrote: “The relationship between alcohol and Prime Ministers is a subject for a book all on its own”), they skip over the far more evocative, if subtle, suggestion that perhaps Tony’s having the same difficulty separating fiction from reality as everybody else who’s been on TV recently, or had their life made into a movie. So if our pub mate Tony was really in the midst of a blackout at the time (like so many seem to be implying) who can really blame him for using help to piece together the greater story?