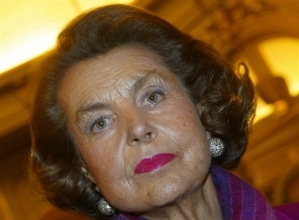 The French police obviously have no love for L’Oreal. And how did they find out about her unsavory business deals? It was her trusty butler.

The French police raided the home of Liliane Bettencourt, heiress to beauty giant L’Oreal, on Wednesday, a Parisian prosecutor told CNN.  The raid is stemming from weeks of investigators looking into Bettencourt’s finances after allegations were made of secret, and possibly illegal, payments to French politicians, including current President Nicolas Sarkozy. Bettencourt is reported to France’s richest woman..

CNN: Her former bookkeeper, Claire Thibout, told police she received envelopes of cash that were to be given to Sarkozy and French Labor Minister Eric Woerth, who previously worked in the Budget Ministry and was in charge of reforms to France’s retirement system.

Thibout said she withdrew the sums of money at the request of Bettencourt’s financial adviser, Patrice de Maistre.

Police have questioned de Maistre several times about the allegations, which Sarkozy and Woerth have both denied.

Also in question is Bettencourt’s Swiss bank account containing 80 million euros, which is roughly $98.3 million dollars, which is not reported on her taxes.

Banier had been the sole heir to Bettencourt’s fortune, and no one has been added to the will in his place, Agence France-Presse reported, citing Kiejman.

How interesting the problems are of the mega rich. Alas, it must be so exhausting to try to find places to stash that much cash; especially when there is no wars, famine, natural disasters, or other atrocities needing money going on in the world.

Jeeves! Where is that check for 100 million? You weren’t donating to the poor again, were you?

When billions become involved the knives come out…