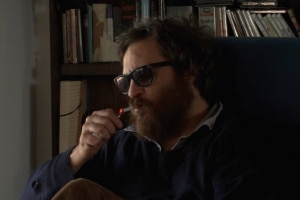 Today “I’m Not There” director Casey Affleck claimed that his hip hop documentary is not only fakery, but that Joaquin really has been acting all along.“It’s a terrific performance, it’s the performance of his career,” he told the New York Times. But can we really call something ‘a performance’ when it entirely consumes two years of its lead actor’s public life?

One of our favorite legends Sir Laurence Oliver remarked upon seeing Dustin Hoffman’s notoriously extreme method acting for Marathon Man:“Dear boy, it’s called acting. You should try it sometime.” Similarly, we should wonder if this tiring two year long spectacle really counts as what we commonly call ‘acting.’

And while, as Casey Affleck claims, ‘Virtually none of it was real,’ is this what we would have said had Joaquin taken his ‘performance’ too far and, instead, completely self-destructed (like his brother River did) in an attempt to feel the greatest pains of his ‘character’ as he blurs the lines between reality and inner fantasy on an unexpected level? (Remember the end of Heath Ledger…)

Surely few films in the past decade, or more, have generated as viral much buzz as this one, and over such an extended period of time. It’s almost as if Affleck and Phoenix made a film that merged itself with reality television by continuously forcing us all to call into question the veracity of our visions until we didnt know whether to laugh or to cry. Instead, we found ourselves forced not only to do both simultaneously, but then argue over who was right about it like squabbling film critics fighting over tenures crumbs.

Which begs the question, which is the real movie we are watching, the one set to be released or the media leaks preceding the release date?