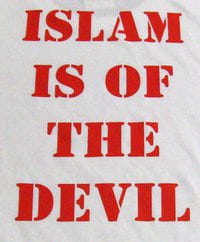 In a move befitting a cult leader of far greater calibre, shortly after agreeing to ‘cancel’ his now infamous ‘International Koran Burning Festival,’ Messiah Reverend Terry Jones changed his mind again, saying that ‘It’s not the time’ and, so, it’s instead ‘suspended.’ Which, of course, creates a far greater problem: what are we to do, now that the ‘International’ Koran Burning can happen at whatever whim our narcissistic savior so desires?

Few statements betray Jones’ not-so-deluded beliefs that he’s holding the world’s media hostage in a global quasi-nuclear standoff over the Ground Zero Mosque, than this one: “The American people do not want the mosque there. And of course Muslims do not want us to burn the Qur’an . . . We have agreed to cancel the event.”

But leave it to so clever a cult leader to break alliances, take some hostages, and use the rhetoric of a missile crisis…

Newser: The confusing chain of events started when Jones called a news conference, alongside Imam Muhammad Musri, the president of the Islamic Society of Central Florida, to say a deal had been struck to move the NYC mosque. Musri, however, said after the news conference that the agreement was only for him and Jones to travel to New York and meet Saturday with Imam Feisal Abdul Rauf, who is overseeing those plans.

It is a real tribute to Jones’ power as a viral marketer that his Dove World Outreach Center which, if ironically, “has fewer than 50 members” (all housed locally we can be sure) has indeed succeeded in becoming an international news sensation.

Which begs the further question, “Who is more delusional”: one man who thinks he can change the world through his theatrical discriminations, or a media that so readily allows covets him and by extension making an oddity into the voice of an even stranger generation and propelling him to superstardom…

Islamic Center, close to Ground Zero gets the green light.