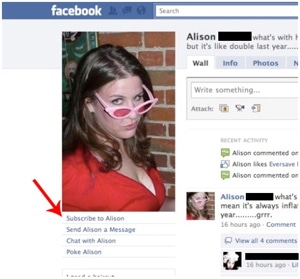 If you’ve ever had trouble stalking someone, what with the long hours and the annoying time commitment, Facebook is now here to help you with its brand new ‘stalker subscribe to button.’ Which begs the question, is Facebook’s new addition tempting unwarranted attention to our private lives?

AllFacebook: “Facebook is in the process of testing a new feature which lets you subscribe to all the actions of a specific user. In other words, you can receive notifications anytime a specific user takes an action on Facebook. It also appears to be Facebook’s answer to Twitter’s follow feature. As a Facebook user who has seen the feature explained to us, “By subscribing you don’t miss any updates from people you subscribe to.”

The resultant universal backlash in the blogosphere, and (it seems) the internet as a whole, is indicative not of a fear of Facebook stalking but of fear of change.

If you’re already posting your most personal information on the internet for the entire world to see, what does it matter that Facebook has a feature which automatically collates the contents of your attention whoring for easy access by your creepers?

Isn’t it, in a way, less creepy that someone is just receiving your updates in an email because they clicked one button instead of clicking through by hand every online interaction you’ve ever had?

The more subtle and potentially serious problem is one of what will surely be a growing and brutal competition among the stalked themselves. As AllFacebook continues, The result would be a fan count and a “subscriber” count, which is the number of people who are guaranteed to get all of your updates.

For all its exaltation and also all its controversy, Facebook has (surprisingly) long been non-goal oriented; but with this new and improved stalking subscriber option surely Facebook sees a way to improve the quality of its content as well as the intrepid (ab)user’s vehement addiction to it.

Such a reward system would necessarily intensify the user’s labor under the pretense of becoming Facebook famous as ‘normal’ people create more exciting content to compete for social visibility within their closed circles much the same way we already see celebrities racing for fans with the help of street teams and publicists.

Doesn’t this sound a bit like the dream of 20th Century idea of avant-gardism — ending the necessity of work and transforming life into a form continuously lived art — but only in reverse? Which is to say, going forward our entire lives will become a constant and laborious struggle to ‘live the hardest’ only to create the best content for the likes of Facebook free of charge?