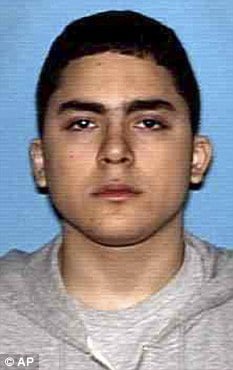 History repeated itself again today when Colton Tooley, a 19-year-old Texas sophomore majoring in Math, donned a dark suit and ski mask before he opened fire with an AK-47 near the infamous UT Tower. After shooting at several people he then walked to the library where he turned the gun on himself.

The clock tower where the shooting began is itself infamous for being the location from which former US Marine Charles Whitman killed 14 people and wounded 32 others using a sniper rifle in a 1966 shooting rampage — one of the American history’s bloodiest and most deadly killing sprees.

Though the shooter still has no known motive and was said to be acting alone, it is, if sadly, not all that surprising that ‘within hours’ Tooley had a fake Facebook page and dozens of friends.

Daily Mail: The page showed just one status update, which read: ‘Today was not a good day. Colton Tooley had to use his AK.’

The profile picture simply showed the logo of the University of Texas: an orange graphic of a longhorn. Beneath it was written: ‘This is exactly who you think it is.’

Soon a ‘bizarre’ Facebook flame war about how AK-47s work by ‘magic’ led one social media user to tell the others: “you guys f****** make me sick,” while 88 other people ‘liked’ it before Facebook decided it was probably in good taste to remove it (an issue all its own).

And while it’s nothing out of the ordinary for a kind of cult following to develop around murderers, oddities, and lone gunmen, aren’t these ‘sick’ cries for attention informed by the culture that surrounds them?

What is that makes someone claim to ‘like’ a teen who who opened fire on a group of strangers before deciding to take his own life? Is this really something that some people in our culture like?

While hard to believe, we could suppose it’s not all that far off from the usual parade of glamorized self-destruction we’ve seen played out on the news and in the blogs more than thousand times.

So when I see this I can’t help but wonder a simple question: are we glamorizing our own self-destruction? And do we really ‘like’ it…?