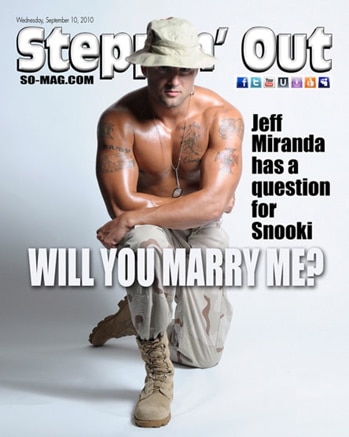 No celebrity hangers-on/significant others have ever seemed as divinely insipid inspired as the veritable media master we call “… don’t whisper in my ear too long or I will swoon to my death, Jeff Marden’ : an Iraq war “ex-veteran” whose taste for strategic assault lies in bombarding American media consumers with his image via trashy magazine covers. This immaculately conspired contrived contribution could perhaps best be described as a dumbed down and more palatable version of Romeo and Juliet aimed at the Garden State’s young and steroid induced .

NY Daily News:: Appearing on the September 10 issue of Steppin’ Out, obtained by RadarOnline.com, a shirtless Miranda poses on bended knee wearing only fatigue pants and a hat, along with the words “Will You Marry Me?” printed across the magazine’s cover.

At best feigning surprise, the usually critical blogosphere has almost, if not wholly,  neglected asking why such a move – made in cahoots with the moguls at MTV or not  – is entirely necessary.

We should search for no greater sign as proof that MTV has tapped Miranda as Snooki’s long-term, though ostensibly forbidden, romantic interest than the strategically placed comments about MTV already ‘leaked’ from Miranda’s interview.

If people could see us together they would think we’re a match made in heaven,” he adds, acknowledging that MTV big wigs won’t be too pleased with his attempt to tie-down their most marketable hard-partying cast member.

Could MTV possibly be any more obvious?

In what dream situation could we see this dynamic duo together? Could it be a spun-off reality show? Next week surprise drug bust? A remake of “Protein shakes forever?”

Just imagine: Jeff Miranda force feeds chocolate double dip ice cream to Snooki during one hazy sunset on the shimmering Jersey Boardwalk (a la Mike the Situation recently) while innocent chihuahua’s in the background silently whimper in approval . The American public laughs and awes. Overwhelmed by raw passion, sweet Jeff suddenly beats his Snookers with a sawed of shotgun. The American public stamps its feet and cries. Jeff Miranda holds his battered Snooki in his freshly-pumped arms, guzzles a protein shake and proposes to host the wedding on the soon-to-be-sanctioned YouTube Pay-per-view system. The American public buys; MTV uses the money to fund a revolution in a small African country and install them as de facto co-puppet-regents (just wait for the Ed Hardy brand leper colony).

In the RadarOnline exclusive(!), Miranda says of Snooki, “Once she deals with the shock I think they’ll say yes. I really do,” he says. “In fact, I know she’ll say yes.”

This is a man with a long-term plan (and most likely stock options in MTV)… But, moreover, mister Miranda, who is this phantom ‘they’ you speak of, that is, before catching yourself and changing your statement to ‘she?’