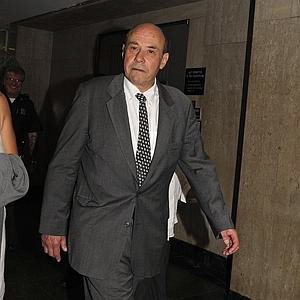 Finally getting his just deserts.

Here’s one specimen of good for nothing human being that’s getting his comeuppance this morning, never mind that to date he has not come up with the millions he swindled from trusting collectors. Where do these individuals keep popping up from? Take your hanky out and read on. My tears for Larry are staining my shirt…

NY Post: He sulked, he squirmed, he dickered over language.

But after months of post-plea stalling and fidgeting, Upper East Side art gallery giant Lawrence Salander was finally sentenced today to serve at least six years behind bars for a massive, decade-long, $120 million fraud scheme.

Salander, 60, was cuffed and carted off to prison in punishment for soaking a roster of 29 wealthy friends and investors, including John McEnroe, Robert De Niro, and some of the East Coast art world’s biggest investors and owners.

Sulked, squirmed. Why Larry? Wha’s bothering you? Oh dear, let’s read on. You’ve really got yourself in a fine mess you know that Larry?

The disgraced dealer — who once strove from his spectacular, five-story Upper East Side gallery to corner the market in Old Masters artwork — begins his incarceration without paying back a penny to his victims.

Why pay them back Larry?

Larry where did the money go, just out of curiosities sake? Let’s find out…

Prosecutors say he’d charter planes to make his son’s little league games. He built his own “field of dreams” baseball stadium on his 60-acre estate in Millbrook, NY, and even in the 11th hour of his scam purchased half-a-million on jewelry as creditors beat angrily at his doors.

Larry, I don’t remember you scuttling any money to visit me eat crumpcakes in Central Park. At least a luke warm tea Larry. That would have bought half a smile to my face. But not even that. Larry- You know diamonds actually don’t last forever…? Especially in your case…

But what did the defense have to say about all of this?

“He is full of remorse,” his lawyer, Charles Ross, said in begging the judge for mercy.

“He feels horrible. He feels terrible that he has been done this to his family, to his friends, to his business associates,” Ross said, calling his client a penitent and destitute recovering alcoholic and Vicodan addict who has lost everything.

“I lost my wife, my business, and my reputation,” Salander himself said, tearfully, as his his slender young second wife, Julie, dabbed at her eyes in the audience.

Larry. Why are you crying like a fool? What did you think would one day happen? Oh please pass me some sugar for my tea, you really are insufferable!

And who suffered Larry besides you?

The biggest single victim, Rennaissnace Art Investors, was taken for an astounding $49 million, the purchase price for some 320 Renaissance works.

He’d steal from new victims to pay back creditors, “in a Ponzi scheme that would have made Bernie Madoff proud,” the prosecutor said.

“He stole my childhood promises,” said psychiatrist Dr. Ellen Shander, from whose collector father’s estate a “soulless” Salander stole $2.2 million in paintings , including a Picasso, a Monet, a Cezanne and a Pissaro .

“He walks in for six years in jail and we’re left to clean up the mess.”

Oh Larry, frankly you really got off to easily. Your mate Bernard Madoff is getting to spent eternity behind bars while you get to spend half a minute in purgatory.

Larry we’ll all be waiting for you when you get out. Just don’t forget to bring the sugar and the blank checks. Oh yes, and the vicodan too. Oh dear…