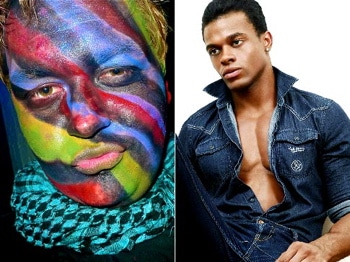 The queen making the call was 26-year-old, Pennsylvania native, James Leahy; an events promoter for Aids Walk New York.  Leahy is better known as flamboyant fixture on the downtown club scene, by the name of Jane Lane. He also characterizes himself on his blog as an “absolute monster, a drag-terrorist.” Hmm. I wonder how well that goes over in introductions.

Jane Lane (we like that better than James Leahy) was released without bail after being arrested and attained Tuesday in Manhattan Criminal Court. He claims he was defending himself.

NY Daily News: “I reached for my ear and it was not there,” said a traumatized Ronnie Brown, 25, whose left lobe was sewn back on after the Sunday night attack. “It looks like a dog mangled it.”

What a surprise that must be. I know how upset when I reach for my drink and that’s not there. An ear being gone? I can’t imagine.

“It’s inhuman, it’s animalistic – it’s in a league of its own,” said Brown, who is worried he’ll lose his modeling gigs.”

Ear modeling is really competitive these days, Ronnie, we hope you don’t lose your luster; maybe it will give you edge.

Can you commit people for believing their an “absolute monster” and “drag-terrorist?” Probably not. Try attempted Cannibalism, perhaps?

If convicted, Leahy could face up to twenty five years in prison.

It’s time to commit Jane Lane, James Leahy. Pull out the insanity defense; that bit was only your appetizer; you wanted more. You’ll be far better off on the funny farm for wanting to eat people, than you would be when your cellmate finds out you liked to put on lipstick and be called Jane Lane.