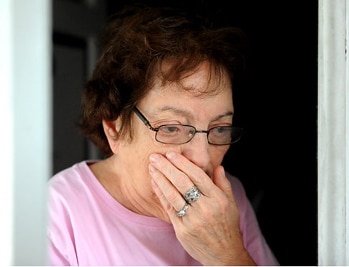 Gone are the days, when you were respectfully called by bell and holler, to “bring out yer dead,” a la the farcical Monty Python and the Holy Grail. At least then, dead-collectors were polite. Today, there is no asking, if they want your dead body, well, they’re just going to take it, and how…

Mattia Filippazo’s, who died in 1998 at the age of 87, dying wish was that her, and her beloved husband Stefano, would have a spectacular final resting place, in which they would be together for the rest of eternity. Mattia and her family spent two years building a remarkable marble mausoleum for them at St. Charles Cemetery in East Farmingdale, L.I, only for her body to be stolen by grave robbers early Tuesday morning. Taking her body that is and leaving her husband’s behind.

New York Daily News: “They took her and not him? I don’t understand anything,” said the Filippazzos’ daughter-in-law, Louise, cursing the thieves in Italian.

“I can’t believe they would do such a horrible thing,” she said. “It’s despicable. It’s sick.”

Cops say the thieves were armed with pry-bars and hammers, and damaged two other mausoleums, but did the most amount of damage to the Filippazzo’s site.

The destruction, and incredibly devious act were recognized the next day, when cemetery workers discovered what remained of the Filippazzo’s mausoleum.What bothered their family most, was that just one, and not both of them, were left there without the other.

Louise, daughter in law of Stefano and Mattia said,

“I was devastated. I almost fainted, it’s been terrible. I don’t even want to eat.”

The couple, who grew up and then married in Sicily, had eight children – five boys and three girls. They moved to the United States in the 1950’s to begin a new life, and settled in Valley Stream, Long Island.