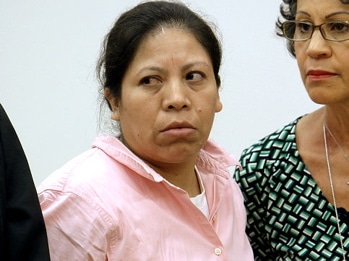 Imelda Vazquez, 15, had stinging words for her mother, Florencia, as she was sentenced for killing Imelda’s 11-year old sister Alejandra with a mop handle, she said through tears, as she read her letter to the Brooklyn Supreme Court, “I will never forgive you.”

What a heartbreaking thing for a young girl to have to say to her mother; especially when they’re likely to be her last words to her.

Imelda also said in her letter, “to her, we were all animals,” and “my mother deserves to get a lot of time in jail for all the harm she has done. … I will never forgive her for what she did to us.” Her mother Imelda stood stoic as her daughter relived the grieve she felt over killing her sister.

Florencia Vasquez was sentenced to 16 years behind bars for the brutal killing of her 11-year-old child, by Justice Neil Firetog. She will also serve a concurrent sentence of seven years for assault. Imelda pleaded guilty to the savage beating death of her daughter in October 2008; hitting her so hard with the wooden handle that it shattered in two, and then she left her young daughter on her bed to die.

Alejandra’s lifeless body was in the apartment for two days, before a man who rented a room from the family’s apartment spotted the girl’s dead body.

New York Daily News: A Brooklyn Family Court judge had removed Imelda from the home before her sister was killed.

“She brought us here with lies and told us we’d have a better future here, but they were lies,” wrote Imelda, who is in foster care along with her three young siblings.

Although Vazquez attorney, Andrew Friedman, insists that Florencia is repentant saying: “She cries often. She’s sorry for what she did; she can’t explain why she did it, only that she did it.”

When asked if she wanted to give a statement, Florencia exclaimed: “I brought them to this country, and this is how they pay me,” which was overheard by a courtroom interpreter.

The hate for her daughters, apparently, spurs from distaste for their father still living in Mexico.

So tragic how often let their hate for other people pour over onto those that do truly love them. An 11-year-old girl should never have to die for her mother’s old wounds.