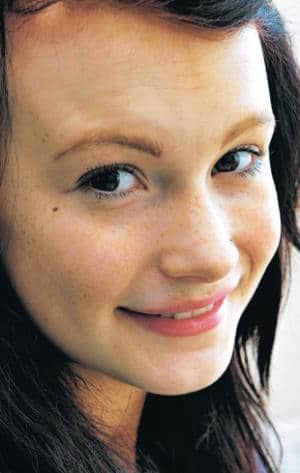 Fourteen-year-old English pageant queen, Sophie Watson, who already holds twenty two beauty pageant titles, and has dreams of being a singer and actress, doesn’t have to worry about touching up her eye or lip liner, her mother, Mrs Watson, has already taken care of that for her. Permanently.

Styleite: Sophie Watson, who already holds 22 beauty pageant titles and dreams of being both a singer and an actress, had eyeliner, lip liner, a fake beauty mark, and her eyebrows tattooed with makeup. Watson’s 29-year-old mother, who is a beauty therapist, says she sees no problem with the procedure. She told Closer magazine, “I wasn’t overly worried and, once she’s got an idea in her head, there’s no stopping her.”

Excuse me Mrs. Watson, I’m sure you can’t just take a fourteen year old somewhere and get her face tattooed without your consent. We’re also sure that a fourteen year old is innocent enough, even in the pageant world, to not be aware that semi-permanently tattoo make up on their pretty little faces; and what exactly is the purpose of this procedure anyway? To save time? Eyeliner does not take that long to put on. And most importantly, why does a fourteen year old girl need to be wearing eyeliner? Eyeliner that will be on her face twenty four hours a day, seven days a week, for at least the next five years. Eyeliner that will deprive her of her childhood and remind her that she is a sexual object to be glorified.

That’s not to mention the positive reinforcement of the idea that one should suffer for beauty. Sophie told the magazine that the eyeliner was the worst part. “I started crying because the thought of a needle being that close to my eye freaked me out.”

Although Sophie Watson’s mother probably thinks that she was doing something wonderful for her daughter, the ramifications of such a young child permanently branded, literally, with makeup will, undoubtedly, have unwanted effects on her psyche.

She would have been better off just telling her young daughter straight up, “Mommy won’t love you anymore, unless you’re made up, beautiful pageant queen, who I can live through vicariously,” it may save the girl a couple grand in therapy in the future.

But at least Sophie gets to be a sexual cougar at the tender age of 14, courtesy of Mrs Watson, her mother…