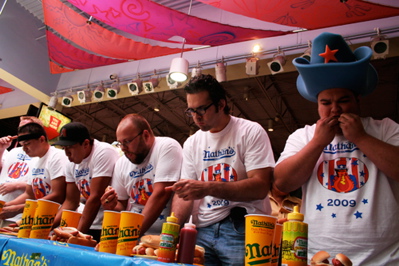 When traveling to Coney Island for Nathan’s 2010 Hotdog competition you begin to embark on a travel of epic proportions.  Upon embarking the B train I immediately ran into a cute foreign couple from the Netherlands who were also traveling to the competition. After expressing their joy from the Netherlands previous world cup victory over Brazil, we began a discussion on what they expect to see at Coney Island. At first they were skeptic about having a good time because they heard that Kobayashi the great Eater was not competing and that the entire area was full of “Freaks”. After I explained to them a couple facts about Coney Island…i.e The Amazing Nathan Hotdogs, Joey Chestnut, the Circus and the abundance of beach bums and the Russian mafia they quickly became excited. By now more passengers had gotten on the train  chanting ‘Joey, Joey’ over and over again. So much for bums.

I quickly got into the crowd of thousands staring at the stage as they announced each competitor with the absence of Kobayashi. As they came to Joey Chestnut, the crowd went wild. Girls screaming “I Love You”, children and men a like aspiring to be him, and me thinking to myself how amazing that for this one day, this man, this eater of hotdogs with lemonade, is treated like a god. Never mind the usual tabloid gods that were flapping sterile like in the wind.

After 100 plus dogs were consumed by all the competitors, the crowd favorite Joey Chestnut came out victorious. As I was weaving my way through the crowd to try and get my interview with the champion, Joey, Mr. Kobayashi, Joey’s main contender who had decided to sit out this competition began making his way to stage too. Except it didn’t appear he was after an interview. That’s when security and police detained him and the hoopla started. So much for getting an interview I thought.

From there I moved onto the official Nathans Hotdog stand. After buying my Bacon and cheese hotdog, a chili cheese dog, a regular hot dog with sauerkraut and lemonade, I immediately found myself in total bliss. I was savoring every bite, every burst of a flavor, like I was a death row inmate eating his last meal. Ironic considering reports Mr Kobayashi would later claim when he was released from jail the following day ‘if only he could of have gotten to eat just one hot dog.

A casual saunter along the boardwalk bought me to Francisco. Francisco the Cuban clown with a big red nose.  According to him he once tried to be a Hollywood actor but he was happy just to get to perform on the boarwalk. After juggling a few pool balls, in which he admitted to stealing, and showing me some magic tricks, I decided to donate some money to his cause. He then showed me his most coveted magic trick. As he reaches behind my ear, he pulls out a dime bag and says, “For only 15 more dollars, you could have your own magic show”. Of course the bigger question was how much did he have had to pay to pursue his failed dream as a Hollywood entertainer?

As I was leaving Francisco I began to feel something in my stomach. It was the feeling of early fireworks going off and quickly making their way upmy esophagus. I rushed to the nearest trash can and without too much grace began to hurl vomit almost exactly bite for bite. In some wierd way I too had performed my own very show for the boardwalk that day, of course no one could really beat Mr Kobayashi’s show. If only they fed him at a hot dog while he was locked away…so much for stars.

The battle of the hot dogs.

Will you be competing at the Nathan’s Hot Dog eating competition?