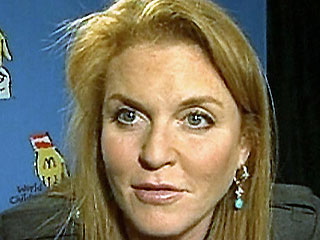 Oprah is taking charity to a whole new level; offering the dethroned, defamed, and disgraced red-headed step child of British Royalty, a prime-time chat show on her O network next year.  One can only surmise that Fergie and Oprah bonded over an enthralling and emotional conversation over their fluctuating metabolisms, non-existent sex lives, and need for acceptance by everyone; which sparked the brilliant idea:

Who better to host a show that is going to be watched by overfed, undersexed, middle-life-crisis bound, women across America? Way to go O! We can’t wait for every middle-aged woman in America to be hanging on her every word, sitting alone in the dark, wiping away tears as they shove handfuls of microwaved popcorn in their faces.

Daily Mail UK: ‘Oprah was impressed by Sarah’s ability to face up to her errors and to apologize publicly for them. Americans love people who reinvent themselves and Oprah believes Sarah can do that on the new network.

Correction, O, May I call you O?

Americans (particularly the demographic that will be watching the show) love when “celebrities” pick themselves up after they fall flat on their face; so they can gossip about with their witless friends, as if they know them personally, until it’s time to praise them for their comeback, all-the-while secretly praying for another failure, to prove they’re just like us. (deep grunt).

Fergie, will not be popular because she is touching the hearts of the Americans, but because, at this point, she is the epitome of failure, and mundane women want to see nothing more than a down-on-her-luck Dutchess fail again. And again.

The bottom line: Mary in Wisconsin could have reinvented herself six times since Tuesday, and nobody would give a shit. Why should we care about Fergie?

Duchess of York blames alcohol for lapse of judgement.