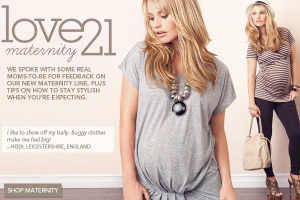 Taking advantage of a cultural phenomenon.

Have you been to Forever 21 lately? You ought to. Why? Just to check out all the wonderful array of stylish outfits pregnant teens can now wear. Which brings the question is the department store simply just catering to pregnant teens or promoting teenage pregnancy?

Salon: … thanks to Forever 21’s ability to feed teens’ insatiable appetite for “fast fashion” — pieces that replicate the most up-to-the-minute trends at prices (and quality) so low that they’re usually worn only a few times and discarded — the chain has snowballed into a $2 billion brand
that legitimately competes with behemoths like H&M.
Which initially sounds like a smart business plan until you read what’s up Forever 21′ s sleeve…

Despite all of that success, Forever 21 is still looking to appeal to even more girls. Having already reached out to plus-sized customers with the launch of its Faith 21 line last year, the chain has unveiled a new effort aimed at the temporarily plus-sized, i.e., expectant mothers. Given that the store as a whole targets tweens and teens, dedicating a portion of the store to maternity clothes is understandably causing a stir. On top of that, there is the fact that the maternity line is premiering in five states, three of which carry the highest teen pregnancy rates in the country.

A bit calculating one might wonder, but then again how different is Forever 21 to Mcdonalds or any other fast food chain that promotes its burgers in the most obese capitals of the nation? After all – the store can’t control young women getting pregnant, but at least it can make them look the part now that they are pregnant. Then again, can one reasonably argue by virtue of their existence young girls are going to purposely get pregnant? After all it’s one thing to look great, another thing to bring another life into the world just so you can wear the hottest maternity clothes. Of course that hasn’t stopped a lot of people from getting wound up….


Over-reactive parents and pundits constantly point a finger of blame at any slice of pop culture that deals with teen pregnancy, saying TV shows and movies like “The Secret Life of the American Teenager,” “The Pregnancy Pact,” “16 and Pregnant,” “Juno,” etc. are encouraging young girls to get knocked up. This, despite declining numbers of teen pregnancies and the fact that the shows often bend over backward to depict the difficult realities of young motherhood.

Which is a kind of backwards saying, just because you provide a service to women looking to appropriately cloth themselves during pregnancy- it doesn’t mean you have potential dads sitting in the dressing room waiting to knock young girls up just so they can now go and buy maternity clothes. Or is it?