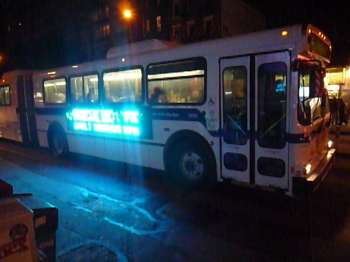 The fun some bus passengers are having with bus drivers.

Have you ever thought about pursuing a career as a bus driver? Gilberto Davila wants to convince you otherwise…

Gothamist:So here’s how it went down with that MTA bus driver who got punched in the face by a rider dissatisfied with the quality of his commute. According to driver Gilberto Davila, the situation devolved pretty quickly after he stopped to let on Jason Ferreira, 22, in Bensonhurst Monday morning. Not long after boarding, Ferreira asked if the bus had arrived at Flatbush Avenue yet, prompting Davila to laugh and tell him that since the bus had only traveled two blocks, Flatbush was still at least 20 blocks away. “That’s why you goddamn bus drivers always get beat up,” Ferreira “exploded,” according to Davila’s account in the Daily News.

Which in a nutshell explains why most bus drivers keep a straight face when the usual freaks take to their daily sojourn on the public transport system. Of course someone should have explained to Davila if he really wanted to excel as a career bus driver a masters degree in clincal psychology would probably go a long way to dealing with the occasional stray nut cracker that turns up. Something every New Yorker comes to realize they will have to go back to school and get if they are to survive the meandering souls called Jason Rerreira.

In the event you are interested to find out what actually happened to Gilberto after his face got used as a sparring tool the NY Daily News is happy to tell you:

NY Daily News: Instead, Ferreira, who a police source said is 6-feet-2 and 205 pounds, pummeled the driver as he drove on Bay Parkway at 4:50a.m., police said.

Such it seems are the sometimes miserable existences of NYC bus drivers. Shouldn’t you be applying to become one soon?