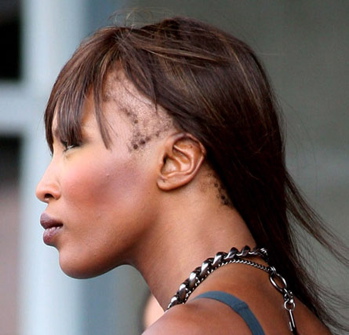 Will Naomi have to give up her super model status?

The fashion world’s collective jaw dropped this morning when it was revealed that uber model Naomi Campbell has been walking the planet with a bald patch. The Daily Mail tries to explain to us the latest dilemma in the fashion world…

Daily Mail Co UK: The supermodel left onlookers stunned as she revealed a huge bald patch beneath her long luscious wig while on a fashion shoot for designer Dennis Basso in New York.

The 40-year-old has revealed signs of a vanishing hairline before, but the true extent of the problem was put on show as she held her hair back as a stylist adjusted her clothing.

Is there something we are missing here? Is it a big no no to be the world’s prized beauty to have a physical flaw? Sure it’s okay to scream and beat up your servants and whoever comes in your way that you disapprove of, but are we not willing to overlook our collective hero when she starts to resemble the thing we’re told is bad for us? But are there solutions?

While prolonged traction can cause permanent loss of hair in the affected areas, it is reversible if caught early.

‘The old-fashion hair extensions were put in by weaving threads which had hairs attached to them between the natural hair,’ he said.

‘They were weaved next to the scalp and tightly knotted at each end to secure them.’

Which all sounds fine. But take it from a gent with his own bald patch- don’t sweat it Naomi, I’ll always love you, and if them bitches curse you out – do what I do, comb it rolled over, no one will ever know except me and you darling.
SHARE
Facebook
Twitter