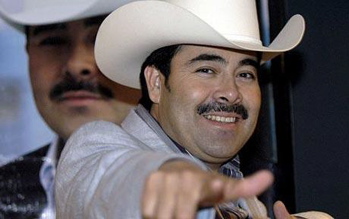 The drug war in Mexico is not going away.

Sergio Vega, a popular Mexican singer was ambushed and shot dead Saturday night, that after reports earlier in the day that he had been shot. Reports that he later came to deny. Unfortunately, he was not able to deny his death later that evening…

BBC:Gunmen opened fire on Mr Vega on his way to a concert in Sinaloa state.

Mexican media reported Mr Vega was driving his red Cadillac on Saturday night when a truck started following him.

Shortly afterwards, shots were fired at the car, injuring Mr Vega and making him lose control of the vehicle and crashing it, his passenger told El Debate newspaper.

Why you wonder they opened fire on Mr Vega? For starters Mr Vega is was what they call a narcocorrido, a person who effectively celebrates drug lords in their songs and the eventual target of rival drug lords. Stimulating right? Makes you want to call your local drug dealer right now we bet…

To complicate matters, Mr Vega or El Shaka as he was commonly known had just increased security measures after a spate of killings of other narcocorridos (which makes one wonder why not just sing about sunny resorts and torrid love affairs?). He had even gone on the radio to prove to his fans despite reports that he was dead, he was in fact quite alive. Well at least until later that evening…

The gunmen then “finished Mr Vega off” with shots to the head and chest, El Debate reported the passenger as saying.

Police confirmed they found spent bullet shells next to the driver’s door.

During the interview earlier that day Mr Vega offer had this to offer:

“It’s happened to me for years now, someone tells a radio station or a newspaper I’ve been killed, or suffered an accident,” Mr Vega said.

“And then I have to call my dear mum, who has heart trouble, to reassure her,” he explained.

He told the site that musicians performing Grupero music were worried, but that he had entrusted himself to God.

To be sure, we wouldn’t have wanted to be anywhere near the same room once Mr Vega’s death was reported to his mother. As for God, well God had other plans, but then again so did rival drug lords. In the end it’s business as usual in Mexico, but then again it’s the type of business that will have performers and fans weary for a while to come. If only Mr Vega could have just sung about sunny resort towns and torrid love affairs…