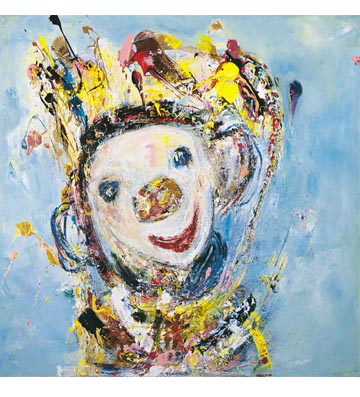 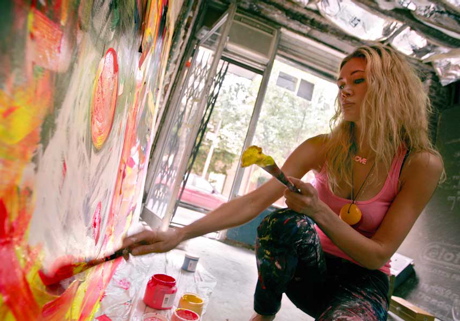 You may or may have not heard of Marianne Aulie even if she happens to be one of Norway’s most well known artist/stars and promising export. Of course come to Norway and you will soon find out that most people have a very definitive opinion on Ms Aulie as it seems they are now starting to develop here in NYC. “Tabloid sleaze,” “trouble maker,” “provocateur,” “genius,” “the artist who appeared on FHM cover nude?” “stunning,” “chanteuse,” “artist extraordinaire,” “trouble maker,” “exhibitionist,” and the list goes on.

For all that has been said of her one thing is for sure she has struck a definitive attitude and identity independent of her work and because of her work. Curious about her rising star here in NYC, the provocative ads she’s been taking out in Norway (and has been rumored considering taking in NYC), her stunts, the critical acclaim her expressionistic work has been receiving I decided to pay this particular femme fatale a visit one recent evening in the heart of the West village where she spends half her time creating her body of work, courtesy of newly formed Norwegian gallery space called gallerisand, (headquarters is in Norway, where Verbjon Sand and his father Oivind Sand originated the gallery) a princely space with wrap around terraces and roof decks and of course a half naked Marianne… 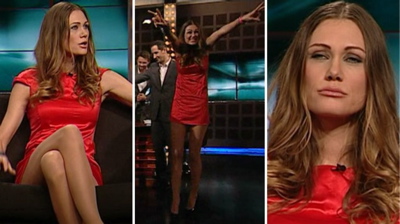 It’s late afternoon and the woman who resembles a Comme de Garcon runway model is poised over a cup of tea and dark chocolate admiring the burgeoning sunset, contemplating the question I have just asked her, her hands still amok from the fastidious session of applying crayolas and oils on a new series of works that she’s been working on lately in anticipation of a late spring show. I pause for a second, regard the sprawling West Village roof deck that she works out of before she begins to speak.

“What you have to understand, I didn’t want to take this route in the first place. I felt as an artist that if I applied to the conservatory that they would have to accept me and of course if you know anything about life in Norway, this serves to validate you and basically say – ‘Yes she has arrived, we like her, we don’t necessarily think she’s brilliant but at least she does what’s expected of her.’ But after 7 applications, they denied me and that’s when I thought enough is enough…”