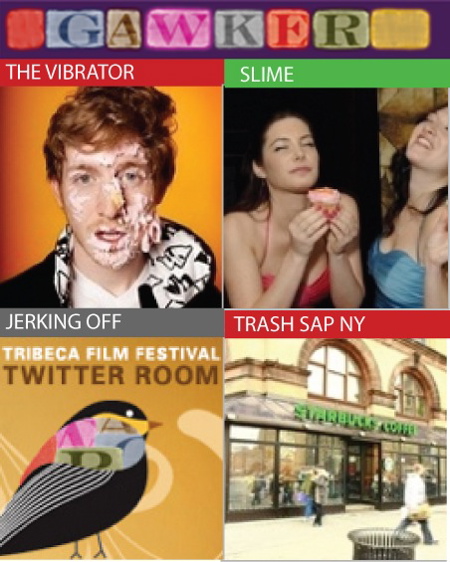 Above is a note that our ‘frenemy’ Richard Lawson (scandalous writer and pet subject of this author) of Gawker recently said to me- essentially a note barring this author (our other interns also received a similar note courtesy of Max Wasserman-an ingrate who once wrote an article for us which led to a fashion designer being scorned and threatening to sue this publisher…blah!) from ever commenting on Gawker’s website ever again. The question then begs, what prompted this behemoth media company from enforcing such a decision?

The note itself is repeated in bold below. Notice the word banned is mentioned twice…blah!

As anyone knows the sole existence of media is to inform the public of current events, ideas, movements and to generally provide a lively and entertaining forum for repartee and inclusion of what passes for news in society or rather that of the world. For anyone who has spent a considerable amount of time perusing the web-sphere they will instantly agree that Gawker holds a commanding position in this terrain. Prone to sardonic humor, scandal and bad mouthing as many derelicts of society and its resulting faux pas. A cause that this author also takes to heart. Of course Gawker will always go a step further and illicit hostile feelings and ridicule because they simply understand this is what sets the readers off and a healthy dissing, with a modicum of tongue and (vicious) cheek goes a long way.

Of course where Gawker and this journal deviate is that we like to take the time to explore the underlying dynamics pursuant to any scene and hopefully by dissecting a scene we engender a more thorough discussion, something that may have inspired Gawker’s publisher Nick Denton once, but since french fries and dollar burgers always fly off the shelf faster a healthy serving of fatty grease congested news will suffice. To be sure it’s a type of journalism that we and many others enjoy. But then again, what’s there to enjoy when a large media company seeks to stifle dissenting points of views, or even corroborating points of views that it comes in contact with? At that point all they are is a pr machine for espoused points of views and hardly fresh or relevant media, appearances aside.

Granted we had a frequency of skimming Gawker’s articles and offering our comments alongside to those articles if we were inspired to also comment with a html link at the bottom of each comment we made that would link back to our site. A clever way to advertise our own opinion and journal, no doubt, but also a clever way to propagate discussion and other alternative points of views until Richard Lawson, a writer that this journal once claimed the number one tabloid sleaze writer in the American tabloid sleaze department (Mr Richard Johnson’s NY Post or rather as I like to call it the NY Gutter– cheekiness aside came in second place…oh well).

So here’s the crux, if Gawker as a publisher was aghast with us linking back to our site, a practice that most journals (including our own) pursue, then why get hyperventilated and cut us off? Could they not simply allow comments to simply be made without recourse to hyper links? After all as long as we or any individual is allowed to add their two cents why dissent? Had we been capricious, were malicious, were racist, sexist or any of the other imaginable ills that some commentators like to pursue- then yes I would understand, by all means cut us off. But Richard, my dear, not once were we profane, insidious, reckless, sexist, racist or any other negative sentiment. We always, always, engendered discussion of said themes that you brought to the table. It was always up to your readers to ignore our comments if they chose to and if you perceived it as jamming our views, then tough luck our dears- this is free press and as long as you portend to present it that way, we should all have access to expressing our voice, as you are always welcome to express your point of view.