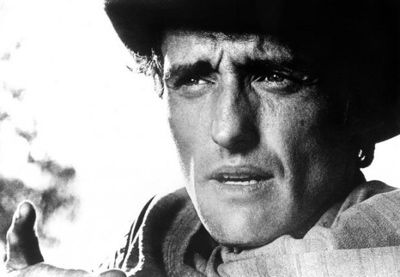 Dennis Hopper dead: An actor remembered for a trailblazing career that challenged character roles and Hollywood perceptions and bravado.

It has to be said, we’ve lost an icon.  (No, I don’t mean Gary Coleman.) Dennis Hopper. Dennis goddamn Hopper. And in honor of his iconic role Frank Booth, I will be emulating his turns of phrase.

The man was unique, not to mention unforgettable. His turn in The Twilight Zone was blood-curdling. (Find it and send me a goddamn link, people.) He was the only thing worth watching in the abysmal Waterworld. His career had its ups and downs, but the man achieved something I believe all great actors fucking aspire to: immortality. And he managed it before he died.

Those eyes that seemed to say, “Are you goddamn kidding me?” That voice.  What can you say about that fucking voice? Was there ever a time when he didn’t sound like he was barely restraining a volcano of rage?

Picture for a minute you’re Dennis Hopper. You’re hired to play a violent, irrational, amyl nitrate-huffing psychopath: Frank Booth. You’re going to terrify and captivate your audiences, and own every fucking second of footage you’re in. Basically, you’re going to play a complete monster. And it will define your goddamned career.