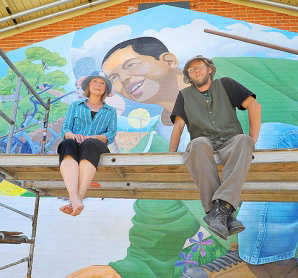 When in Arizona avoid admitting you have dark skin.

It’s seems America has having a hard time adjusting to the reality that there are other colored people who live here besides white. Where they are particularly having that problem right now is Arizona, in fact at a school mural of course, where if we remember correctly children are taught values. The particular cause of the school mural ruckus- people in cars are driving by and defacing the mural which has now prompted the school principal with the supposedly only sensible solution; to make the dark kids look lighter.

The Arizona Central explains further for us.

A group of artists has been asked to lighten the faces of children depicted in a giant public mural at a Prescott school.

The project’s leader says he was ordered to lighten the skin tone after complaints about the children’s ethnicity. But the school’s principal says the request was only to fix shading and had nothing to do with political pressure.

Of course if the principal tells us that it’s just to make the piece look more artistically correct we must believe him right? Because that’s what most school principals are good at pointing out, never mind the silly things that are going on down the street which may have also influenced his decision.

R.E. Wall, director of Prescott’s Downtown Mural Project, said he and other artists were subjected to slurs from motorists as they worked on the painting at one of the town’s most prominent intersections.

Slurs? What type of slurs- “Hey that painting needs to have better color shading,” or maybe this type of slur “Hey Latino cock licker.” Which slur do you think really concerned the principal most?

But before we get too tough on the school principal Mr Jeff Lane we need to get maybe a little tougher on City Councilman Steve Blair, who if you also guessed is also a critic, but not really an art critic.

In a broadcast last month, according to the Daily Courier in Prescott, Blair mistakenly complained that the most prominent child in the painting is African-American, saying: “To depict the biggest picture on the building as a Black person, I would have to ask the question: Why?”

In any event the mural was changed to look the way it was suppose to look like in the first place and now all the white people in Arizona are happy again. Of course we would like to ask City Councilman Steve Blair how happy he is but for some reason he’s never around to speak to the media. He must be too busy painting we guess…