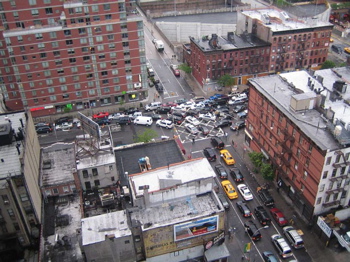 Anyone who’s a real New Yorker can name for you all the short cut name city zones that exist within Mnahattan- SOHO, NOHO, BOHO, DUMBO, UES, but did you know there’s a new name being put through the wood works? It’s called ‘LINC,’ which we suppose is something that’s supposed to connotate something more than human wasteland vitriol that it really is.

The Daily News notices the new condos being developed in the area, but also looks at the reality: “For now, it still has an old New York feel as eccentric locals and a spillover of tourists and colorful panhandlers from the Port Authority Bus Terminal crowd the gritty streets — recently joined by young preprofessionals paying more than $2,500 a month to live in studio apartments in the new crop of luxury rentals. Bars, some new and expensive, others decades old and mangy, are everywhere.” Also, it’s “not a place for families, yet… In fact, we saw more street characters than baby carriages.

Street characters that will soon be gawking and begging once the nouve riche find the courage to move in given the sleight of hand trick of calling a basket case a rosemary fluffy bush with cinnamon crusted snowflakes.

A tag sale vendor said, ” Six years ago, this neighborhood was full of crackheads. It’s nice we can do this,” but one resident was downbeat on the creeping gentrification, “It saddens me that it is such a struggle to keep alive the New York that made us creative, committed adults. To take away the character of a neighborhood is criminal.”

Last time we checked the crack heads were there. If anything once the buildings go up they’ll all start hanging out in the lobby. Linc- what a wonderful name for a derelict neighborhood. But if you ask us – ‘STINK’ would have been a little more appropriate, tourist sentiments aside.