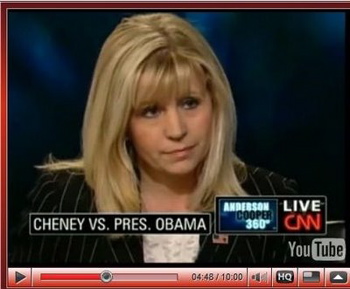 All in the family.

Liz Cheney, for those of you who don’t know her is an outspoken foreign policy analyst and cable news personality as well Dick Cheney’s (the most recent vice president incumbent) daughter. Lately Liz has been making the rounds to have certain things investigated (cause that’s what you do when you are a political figure looking to score dirt points)- specifically that of a recent white house job offer made to Joe Sestak, on Sunday morning’s on Fox. What she of course doesn’t want to be investigated because it would waste resources are the torture practices employed by her father at Guatanamo Bay. But that shouldn’t surprise us, or should it?

There has been no bigger critic of the idea of launching an investigation into the Bush administration’s authorization of torture on terrorist suspects than Liz Cheney, daughter of former Vice President Dick Cheney.

The foreign policy analyst and cable news personality has scoffed at the idea that an independent council would spend time looking into the matter, arguing that it would be crippling to the intelligence community and a waste of time. After all, the harsh interrogation techniques used during the Bush years worked, she says.

Considering how adamantly she’s argued this point, it would stand to reason that Cheney would set a high bar with respect to what scandals deserved an investigatory commission. And yet, there she was on Sunday morning, during an appearance on Fox News, demanding that an independent body look into the job offer the Obama White House made to Rep. Joe Sestak (D-Penn.) to get him out of the Pennsylvania Senate race:

Is it just us or is there a double standard going on? Let’s make a big fuss about Joe (because we suppose he’s a big bad man we should all stay away from) but let’s at the same time spend precious resources dealing with energy policies, oil rig safety concerns, which mandate money over safety first, abuse and compromising of civil liberties, financial deregulation which led to various housing bubbles and the current recession. These things shouldn’t as Liz intimates be pursued, but Joe, well he’s another critter, a dangerous one, that we all ought to sit up and take notice of.

On Friday, the White House released a memo revealing that they had dispatched former President Bill Clinton to float the idea of Sestak serving on an uncompensated advisory board for the administration, in which he would remain in the House and not run for the Senate. Sestak declined the offer, eventually entered the Senate race, and ultimately beat the incumbent Sen. Arlen Sepcter (D-Penn.). Lawyers — both Republicans and Democrats — have since called the whole saga a non-issue. But that didn’t satisfy Cheney:

Which makes us wonder, is Liz looking for a visit to the loony bin, raising new money behind our backs, or just having us all on this memorial weekend. We’d like to think the latter…