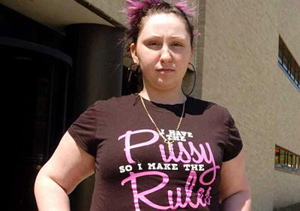 The things that pisses judges off.

Jennifer Lapenta thought she’d go and help a friend out as she headed out to court with her while she resolved outstanding traffic fines. Remembering she was going to be seen in public Jennifer thought she should put on one of her favorite t- shirts. The t- shirt as it turned out helped keep Jennifer hanging around the courts for an extra 48 hours. A magic feat you may wonder, but a feat that you too can muster if you step into Judge Helen Rozenberg’s lair with a boldly colored shirt that goes something like this:

“I Have The Pussy So I Make The Rules”.

Apparently Jennifer didn’t realize that Judge Roz also has a pussy, an older one in fact, but a perfectly functioning one and that older pussy always makes the rules when she’s in town.To be sure Judge Roz was not amused when she saw the 19 year old Jennifer sitting there mindlessly toying her favorite t- shirt. That’s of course when things got interesting:

Judge Helen Rozenberg called Jennifer to the front and told her the shirt was very offensive. Jennifer offered to take the shirt off (you know, because her bare titties are less offensive), but Judge Helen wasn’t having it. Judge Helen showed her who really had the biggest pussy in that bitch by charging her with contempt. Jennifer was arrested and thrown in a jail cell.

To be sure young Jen is really pissed off, because rightly or wrongly she has come to learn that because she has a pussy the world must have compassion for it and obey that ultimately ‘it’ decides your fate. The only problem with this line of thought is when you run into other gals who have older pussies, more famous pussies or even tighter ones.

In any respect Jen is upset and is thinking of suing judge Roz, because if she wants to advertise she has a pussy, she should be allowed to do it wherever it ‘damn well pleases her.’ We think Jen has a point, but then again, why advertise the obvious?