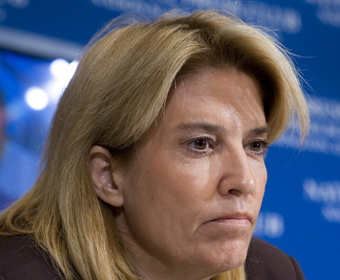 Trying to see who’s smarter- Greta or the internet.

This morning Greta is probably walking around town with a large brown paper bag over her head after a public stunt back fired on her. How did she take to such a dress sense you wonder? Let’s all find out…

Greta Van Susteren, a staple on Fox News, received an e-mail from Brian, an otherwise anonymous viewer from Tehlequah, Okla., who wrote in to tell her how dumb she was. “You have a mind like a seive [sic]. Your brain is empty,” Brian wrote. “Matter of fact, it is so empty, if you put a pea in your skull it would rattle around like a BB in a boxcar.”

So what was Greta’s reaction? To ignore Brian’s email, take it and throw it in the waste bin or to even kindly respond and tell Brian that he is entitled to his opinions? No, Greta being a media personality of the highest order decided that it would be a better stunt to publicly respond to Brian’s email. After all, why not find out once and for all if your audience really feels the same way (and tweak those ratings…).

Van Susteren, without hesitation, turned to her blog on Fox, the Greta Wire, where she posted a poll that asked readers to vote. “Who is dumber?” the poll asked. The options: “Greta?” or “Brian for spending his time watching someone he thinks is dumb.

Of course there was one hitch in this supposed clever pr trick on Greta’s behalf. The hitch- Gawker, who like to troll the media landscape with iron fangs and in due course Greta was looking valiantly for a large brown paper bag to sheepishly strangle over herself with…

The moral of the lesson, don’t try to outsmart the media, because when you least expect it you will be looking for a brown paper bag to go nicely over your head. An irony we are sure that Greta will not be forgetting too soon..Of course somehow we don’t suspect Brian will stop watching her either.