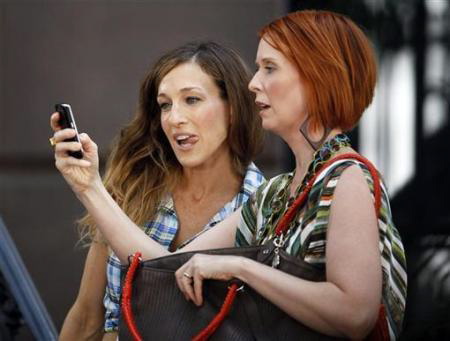 As you may be aware—and if you live in New York, you’ve been inundated with posters—Sex and the City 2 arrives in theaters this Friday.  Hooray.

It’s not something I’ve given any amount of thought to. Not until my illustrious publisher asked me to consider it, anyway.

So. I confess, once upon a time as a younger man (working at Our Lady of Blockbuster), I rented a season or two of the series to see what the hubbub was about. It was popular, it was supposedly well-written, and hey! Premium cable programming, which meant plenty of adult language and a fair share of nudity. Who doesn’t love that.

In answer to the titular question, ‘Can a straight man love Sex and the City?’, the answer is… maybe.  I don’t, but I’m only me. I can only speak for myself.

Why don’t I love it?  Well. For starters, I didn’t find myself sympathizing with the characters that much. They’re women in their 30s and 40s, looking for their respective perfect partners. The only thing they appear to have in common is that they all started as single, and had no problem discussing their sex lives in front of complete strangers.

I haven’t caught an episode in years. It’s my understanding (don’t bother correcting me if I’m wrong) that the four women ended the series married, or at least settling down with the men of their dreams. I gathered that Sarah Jessica Parker’s Carrie Bradshaw got hitched in the first movie, which begs the question… why make a second one?

What is there left to tell? What’s left to experience with these characters? Why should I care?

I’d be remiss if I didn’t mention what I actually dislike about the show: The characters. Namely, Miss Carrie Bradshaw. She was selfish, dishonest, petty, indecisive, materialistic, and overall a pain in the ass. If the last few years of television have shown us anything, you can make engaging stories out of violent, dark characters. It works. But you’ve gotta have a great protagonist.

I think I get why women like the show:  Attractive, empowered women live their lives on their terms in the most vibrant, exciting city in the country. They have healthy sex drives, they meet interesting people and try them on like a prospective pair of Manolo Blahniks. Women can share a vicarious thrill with superficially wealthy women who never seem to have to work too hard, or suffer the consequences of their less intelligent choices. It’s an escapist fantasy they can get behind. I get that.

Guys, on the other hand. There’s relatively little in it for us, save the off bit of nudity or a snarky one-liner. (What. Good dialogue is good dialogue.) The only scenario in which I can see a guy enduring the show on a regular basis, is for the sake of his girlfriend or wife. Couples like to spend time together, and one way to do that is by watching TV.  For the sake of your relationship, you might just have to put up with the odd half-hour of Sex and the City.

I won’t be catching Sex and the City 2. I didn’t see the first movie, and I managed to cope. But for the guys who have to go, arm in arm with their women…   I totally understand.

The Sex and the City mayhem officially arrives in NYC.»