at least had the integrity to stick to their made-up story.  Either we know each other or we don’t.  Either we are enemies or we aren’t.  Sending sweet text messages doesn’t exactly seem like what you do to strangers or enemies, does it?  Why would they even have my phone number?

Here is what I’ve learned from my unfortunate interactions with the Mercer sisters: Ambition can be healthy and good, but not when it trumps morality.  On the show, my quips never touched on gender, physicality, sexual orientation, or race in order to create drama. Yet Tinsley and her minions – whose very own show benefits from the drama I created – instead go with below-the-belt attacks and outright character assassination. Perhaps they simply aren’t bright enough to be dramatic without making derogatory and offensive comments.

For all of Tinsley’s efforts to portray herself as the queen bee of the upper class, the woman is clearly devoid of class. Something that Jackie O, Audrey Hepburn and Princess Di all had that Tinsley and her Dynasty-reject mother lack is a regard for others.  While I made comments along the lines of “she’s about as royal as Burger King,” (news flash, Tins, this is an entirely true statement that shouldn’t be offensive!) her mother Dale derides my lips and says that I’m “common.”

I know that this family wants to pretend that they are somehow better than everyone else, to the point that Tinsley would film with no one but her mother, her sister and Paul Johnson Calderon (who is, in his own mind at least, “already at the top” yet subservient in his desire to be her stylist).  Think about who else she filmed with – maids, handbag factory workers, etc.  Look at the kind of press she agrees to do – photo shoots with the girls of Jersey Shore in which Tinsley is depicted as some kind of paragon of refinement for the lower classes to emulate.  For Jackie O (wife of an iconic president), Audrey Hepburn (talented actress and movie star) and Princess Di (real royalty, not the Burger King variety), it was their complete disregard for their actual status that gave them what we refer to as “class.”  It is Tinsley Mortimer’s hyper-awareness of social status and neurotic desire to scurry up the social ranks and trumpet herself that makes her such a lowly, classless creature.

So, Tins: You can fool Gawker, The New York Times, The Wall Street Journal, Vogue and so many others into thinking you are some kind of model of sophistication when you really have the morals, will power and hunger for camera time of a drunken co-ed flashing a Girls Gone Wild camera.  I can see what you are really like and I only hope that others come around. 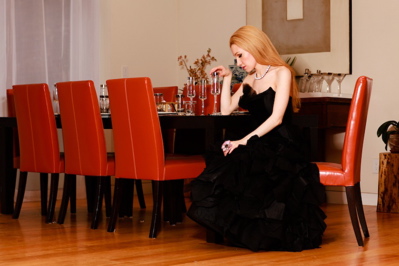 Mistakes to Avoid as a Wedding Guest

Lesbian couple who moved to Bali to be deported over Queer...

Colorado man chops up man, stuffs him in suitcase undone by...