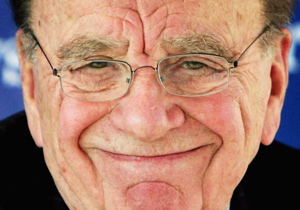 How Rupert intends to starve the media world.

Out of today’s Guardian comes the interesting tale of Rupert Murdoch‘s latest foray in the media world. With his very much ballyhooed plan to offer steep advertising price cuts in his US publications the NY Post and the Wall St Journal, his hope is to undercut the US behemoth the NY Times by as much as 70- 80 percent. A grand plan indeed to curry the fervor of advertisers but a logical one?

With content already free for readers one wonders what Murdoch is really thinking. One minute he’s insisting that readers need to start paying for content and yet here he is now telling advertisers he’s willing to accommodate them for next to nothing. Forgive this author’s curiosity, but does that mean as a fellow journalist, should I soon be preparing to start foraging for food out of garbage cans so as to maintain my survival, and in the event publications start firing journalists in droves because they can no longer be had, will there be punching matches going on as we fight for the lonely bar tending job in some Lower East side dive?

I see in the Financial Times that Rupert Murdoch is offering steep discounts to advertisers prepared to take space in the Wall Street Journal and the New York Post.

It is part of an aggressive attack on the New York Times, timed just ahead of the 26 April launch of the WSJ’s special New York edition.

An aggressive plan indeed and even if Rupert has the deep pockets to play this game and weather the ensuing storm in order to attract advertisers, will it boost his circulation (the end desire after all) and will it leave him richer in the long run? Of course one need to ask what if in the event his plan backfires are we as fellow journalists to commiserate that it was a nice go anyway as we forage through tipsters whilst Rupert licks his wounds in some five star complex?

In one sales pitch seen by the FT, News Corp has offered to sell a full-page print advertisement in New York region editions of the Journal and the New York Post and a banner ad in the Post for an estimated $19,000. A full-page ad in both papers combined would normally cost between $91,500 and $95,263, according to publicised rates.

At that rate as a fellow journalist should I be flying to Iran, where it is legal for citizens to sell their kidneys, quickly find an Iranian bride and consequently see what what I should be able to get for my kidney, or will I only find myself surrounded by other journalists who’ve already agreed like Murdoch to sell themselves for pennies?

Yet giving ad space away for virtually nothing, thereby sacrificing revenue to fund journalism, is supposedly ok – as long as it undermines the capability of an opposition that does spend money on journalism.

Helpfully, New York magazine has revealed just how much the Times devotes to its journalism in the city by comparing its newsroom staffing with that of the Journal’s/

So here’s my prediction going forward, we wont be writing about things that matter anymore, instead we will spend copious amounts of time reflecting on the ‘good old days,’ our tenacity for self destruction and the occasional faux pas of  faux celebrities and pass that off as journalism and hope that some day someone remembers to pay us. Actually to think about it, I think that’s exactly what we are doing now.

In any event I’m going to look for tipster somewhere near Rupert’s mansion, I just want to make sure he sees the large X I plan to plant on my missing kidney when he disposes his trash…