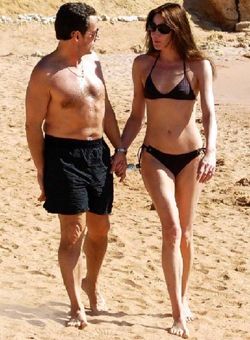 The sleaze that even France can’t help drooling over.

Looks like it’s contagion season. Why? Twitter silly, that little thing that you attack all day long to send wonderful crap of information for the world to breathlessly choke on. Latest choke- the supposed affair that the King and Queen of France (yes they still exist over there…) Nicolas Sarkozy and Carla Bruni are having. See even royalty can’t escape the sleaze factor…Anyway, let’s all amuse ourselves for a second and read on…
Source – The Awl.
The rumours that both the Sarkozys were having affairs began on Twitter and spread from blog to blog in France in recent days. They appeared, somewhat dismissively, in a blog on the site of the Sunday newspaper Le Journal du Dimanche, but have never appeared in print in France.
The news magazine L’Express said on its website last night that the rumours had been started by a “journalist intern” or trainee as an exercise to test the gullibility of the media. It said that the reports had been picked up by the blogs of “respected” web journalists but only as a “running gag”. The blogs had, inadvertently, given credence to the rumours and allowed them to make the leap into Italian and British newspapers, which reported this week that “all of France” was chattering about the alleged affairs.
Italy? You know the Italians are so full of credibility right. Anything happening out of Italian boudoir rooms is to be believed and gingerly perfume smeared. So is it true or not – French royalty are having an affair? As the Awl reflects:
like pretty much every salacious story we read in the media these days is basically somebody trying to prove how easy it is to get a salacious story into the media.
Thanks twitter, for keeping me super informed. Let me know when I end up having a 3 way with Nicolas and Carla- blah!!
theawl
SHARE
Facebook
Twitter