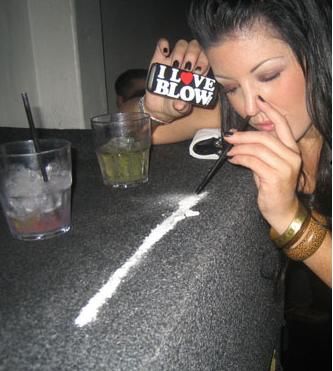 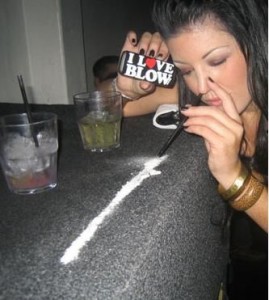 The sleazy things that go in at nightclubs.

Could it be true? Cocaine, scantily clad cocktail waitresses and the club owners who lust after them? This seems to be the new take in a recent law suit filed by horrified cocktail waitress, Nicole Slama to the tune of $3.5 million against Quo co-owner Gary Malhotra. As reported by the NY Post:

In a $3.5 million Manhattan Supreme Court sexual-harassment lawsuit, Nicole Slama says Quo co-owner Gary Malhotra cornered her in a storage closet at his West 28th Street club, and then forced her into using her body as human drug paraphernalia.

Human drug paraphernalia? Isn’t that something most starving artists/young ladies who support themselves in the ‘recreation’ industries aspire to be? What was wrong with Slama, didn’t she realize that club owners like Gary are sleaze players that prey on vulnerable girls like her? Or is it the other way? A disgruntled former cocktail waitress who after been let go is looking for some hefty change as Gary likes to claim. Really what’s the truth, and frankly should we be concerned about coke induced behavior in an environment that breathes it? Or where they all just snorting plasticine that has unfortunately choked up their memories?

On her first shift, she made $500 — but she also started hearing rumors that the owners often used the manager’s office “as a place to do cocaine and to have sex with employees and guests,” the suit says.

$500 and she didn’t want to resort to some additional prostitution? Is this a warning sign for aspiring cocktail waitresses? Should one’s application form ask if potential hires are into fast money, long lines and the occasional objectification as human paraphernalia? Is this just a hidden secret in the club world that cocktail waitresses and their bosses are at times obliged to go the extra distance, or then again, maybe these are the ‘perks’ of making $500 in your first shift. So much for danger money right?

He then “slipped the strap of her tank top off her left shoulder and pushed her left hand down so that she could not move it” and shook some coke onto her shoulder, before snorting it off and licking her shoulder and neck, the suit says.

Just a young girl’s rampant imagination or the reality of Gary Malhotra’s world?