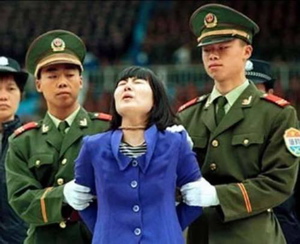 How the Chinese government likes to keep you guessing.

This morning Amnesty International released a dossier of all those countries that still executes its citizens and the good news is that China managed to stay in first place as the leading executioner of citizens. As a side note the US wasn’t too far behind, only slightly edged out by some of those other nations that we are so often told are tyrannical. So without further ado, let’s have a look where death always comes easier….

The report, Death Sentences and Executions in 2009, reveals that at least 714 people were executed in 18 countries and at least 2001 people were sentenced to death in 56 countries last year.

This excludes the thousands of executions that were likely to have taken place in China, where information on the death penalty remains a state secret.

State secret? Mmh, why should something like that be a state secret, surely transparency is a good thing …. except when it’s not? Continues the report:

“The Chinese authorities claim that fewer executions are taking place. If this is true, why won’t they tell the world how many people the state put to death?”

The report then goes on to give the regional breakdown where lo and behold America with its benign passion for humanity, morality, ethics and general good will figures in the top 5,  2 notches  behind Iraq, a great place where hordes of humans practice human empathy and the occasional market blast suicide bombing…and one notch behind Saudi Arabia where we buy so much of our oil.

In addition to China, the worst offending nations were Iran with at least 388 executions, Iraq at least 120, Saudi Arabia at least 69 and the USA with 52.

For the first year since Amnesty International began keeping records, no executions took place in Europe in 2009. Belarus is the only country in the region that continues to use the death penalty.  Across the Americas, the USA was the only country to carry out executions.

Iran – 338 executions? Mmh, that’s a bit on the high side, but thank the lord America has nominated them as a terrorist state that we should (always) be getting ready to go war against. Which leaves us with the unsettling problem of China…

So the world may be moving towards a benign regard for human life but the Chinese government ever so mindful of it’s worldly aspirations is keeping quiet, quietly killing off those citizens that give it too much grief, dissent and all the while somehow coming up with all the spare cash to keep buying all that American debt, never mind the fact that America likes to occasionally look the other way when a foreign nation violates those rules that it so openly beseeches other nations to take.

We’re curious to see where America ranks on the list next year, but for now our bet is on China for first place.