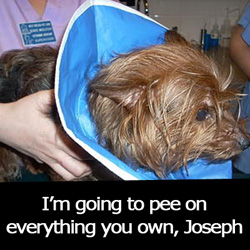 The horrible things that go on off Broadway.

Welcome to douchebag boyfriend of the week: Joseph Graves, who couldn’t help give his big time actress girlfriend’s (Ashley Yeater) little fluffy dog (Emmet) a nice little savage beating over the weekend causing the dog considerable anguish– not to mention countless New Yorkers who are now hatching plans to have Grave’s balls cooked in chicken curry.

The unsavory facts as reported by unsavory journal the NY Post:

Joseph Graves, of Hells Kitchen, was charged with a felony count of cruelty to animals and criminal mischief for the Jan. 16 incident in which he admitted losing his temper and whipping Ashley Yeater’s tiny dog with a belt and kicking it several times, sources said.

Mmm, kicking it a several times. Is this part of the sexual initiation act that Graves likes to perform before sweetheart Ashley gets home from work?

“Hey Ashley, I beat little Emmet again. Thought it might spice up things in the sack.”

“The dog suffered traumatic injuries and could have easily died from those injuries if he waited much longer,” said Joseph Pentangelo, a spokesman for the ASPCA.

Waited a little longer, because Graves waited 2 days before taking poor Emmet to the vet. Of course as we all know Graves was just stewing and waiting to come to the eventual decision of whether to save the dog’s life after as we all can imagine Emmet had the temerity to piss off Graves. Stupid dog. Right? Good thing Graves taught Emmet a lesson…

Oh well, it looks like Graves might be a little indisposed for the unforeseeable future. Wonder about the sex life now kids…